The spiritual successor to the prototype multiplayer maze game MIDI Maze, Faceball 2000 is a cutesy non-violent first-person shooter released for the Game Boy (and later the SNES, PC Engine, and Game Gear).

Faceball 2000 (known in the PCE version as Faceball) is a first-person shooter developed by Xanth Software and published by Bullet-Proof Software for the Game Boy exclusively in North America on December 10, 1991.

The spiritual successor to the studio's 1987 Atari ST game prototype MIDI Maze, the game has players moving around in a mazed arena as floating smileys (known as Holographically Assisted Physical Pattern Yielded for Active Computeized Embarkation, or H.A.P.P.Y.F.A.C.E.) while shooting large orbs at other smileys to "tag them out".

Along with multiplayer support (via link cable), the game has a single-player "Cyberscape" mode (with multiple A.I. drones, each with their own "personality"). It is the only first-person shooter released for the Game Boy and the only game for the system to support up to 16 simultaneous players (using up to seven Four Player Adapters, each of which were only sold as a bundle with the GB version of F-1 Race).

The game was later ported to three systems: the Super Nintendo Entertainment System, the PC Engine (in Super CD-ROM² format), and the Sega Game Gear. Each of these them were the first released first-person shooters for their respective consoles. The PCE and GG versions were released exclusively in Japan (by Riverhill) and are the only first-person shooters released for those platforms.

The PCE version, released exclusively in Japan (as Faceball) on November 26, 1993, removes the Cyberscape mode for four-player split-screen support, bonus cutesy faces (each with their own voice acting), redbook audio, new graphics and levels, a new user interface, and a bonus "Race" mode (where players race to collect orbs).

The GG version, released exclusively in Japan on December 17, 1993, is a carbon-copy of the original game. It only supported two-player link cable multiplayer.

The game is a first-person shooter, where the player controls a floating head inside of a giant maze. The goal is to eliminate enemy heads by shooting large orbs.

The SNES game features two normal modes and one hidden mode. The first mode is called Cyberzone, in which players must eliminate a set number of opponents before an exit opens up and they can progress to the next level of increasing difficulties. The second mode is called Arena, in which players can choose from a variety of enemies and stages to play on, with the goal of defeating all the enemies. The final, and hardest mode, is called Cyperscape. Instead of having to eliminate a set number of enemies, Cyberscape is much more maze-focused, not having a map for players like other modes. This mode can only be unlocked by entering a code in the player select screen. All modes can be played with two players. 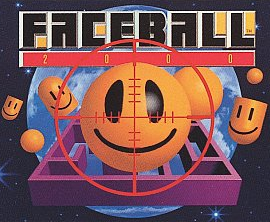