Backyard Wrestling 2: There Goes the Neighborhood

Backyard Wrestling 2: There Goes the Neighborhood is an arcade style fighting game loosely based on no holds barred wrestling.
PlayStation 2

Backyard Wrestling 2 features 7 interactive location/arenas to fight in, filled with unique weapons and "Enviro-Mental" throws, where the player can smash the opponent through objects, shove their head in a deep fat fryer, and take a staple gun to their head. In a couple of the arenas, the player can use fire to their advantage, and set certain things on alight using any piece of wooden material, such as piles of leaves and picnic tables. Interestingly, yet again, not all arenas are backyards. The locations are:

Backyard Wrestling 2 features some over the top weapons that, in real life, would straight up kill the person you are fighting, and unsurpringly, these weapons aren't that fun to use, though they do take off huge chunks of the opponents health, which proves useful in the later stages of the career mode. Here are most of the obscene weapons.

Aside from the ridiculously dangerous weapons, there are a slew of "regular", yet still dangerous, weapons, all varied in damage, reach, and durability. These are scattered all around the levels. Some levels have more weapons than others, and most levels have weapons that only appear in that said level. There are also weapons that only appear after breaking something, i.e. a table. Depending on the weapon, certain moves and grapples can be performed.

One of the things that has been improved since the first Backyard Wrestling game is throw able objects, no longer do they follow the player like some sort of homing missile, now, thanks to the improved havok physics engine--and of course, the decision--throw able objects are a more "hit and miss" affair.

Weak weapons such as wooden planks, have durability. After a few solid hits to the head, the weapon will shatter and crumble and effectively become unusable, but some weapons will break into smaller weapons. As a nice touch, the debris will stay for the remainder of the match, and unlike the first game, weapons and tables do not respawn, giving a much more "realistic" destructive feel.

Here are just five of the many "regular" weapons:

As if it was Mortal Kombat, Backyard Wrestling 2 features a obscene amount of blood. Blood will spray, fly, and fall to the ground often leaving a bloody mess on the floor, which slowly fades away. The character models will gradually get more bloody and damaged as matches go on, some characters will look worse than others though, and the females don't damage at all. For a wrestling game, gratuitous blood can be an odd thing, but some would say it fits the crazy arcade style the game is coming from.

The game features several guest characters that the player can choose from in exhibition such as Andrew WK, a huge supporter and fan of Backyard Wrestling, he also makes an appearance in a GameSpot video interview, selectable in the Media Room section of the main menu, as well as featured twice on the games huge soundtrack. Famous Pornstar's Sunrise Adams and Tera Patrick also make an appearance. As in the first game, the Insane Clown Posse make a return.

Here are all the characters for select in exhibition. Only Zandig requires unlocking. 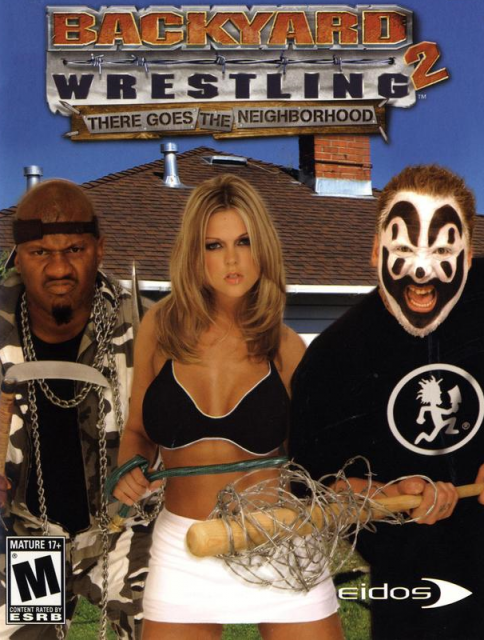