Air Strike Patrol is an isometric, tactical jet fighter shoot 'em up developed by Opus for the SNES. It was released in Europe by System 3 Software, where it was known as Desert Fighter.

A.S.P. Air Strike Patrol (Desert Fighter in Europe and Japan) is an isometric jet fighter game superficially similar to EA's Strike series. The player must choose a load-out for their fighter jet and has a series of mission critical targets to find and destroy, but they can also explore the large maps for additional goals, fuel and ammo permitting.

The game was originally published in Japan by SETA Corporation in early 1994. It would be released in Europe later the same year by System 3, and then in the US the following year.

A.S.P. takes place in a fictionalized version of the Gulf War of the early 90s. The player is a UN jet fighter pilot, a member of the eponymous Air Strike Patrol, who is assigned various missions in areas around a fictitious Middle Eastern country named Zaraq. The ultimate goal is to oust Zaraq's dictator, who is later revealed to be working with some unconventional outside help.

Players are expected to outfit their craft before sorties (mission attempts), using upgrades they've acquired to equip one of two real jet fighters: The F-15 and the A-10. After reviewing the mission report and selecting an entry point, the player begins their sortie.

Sorties play similarly to the Strike games: The player controls a jet plane flying a few hundred meters from the ground in an isometric landscape. Their fuel and ammo is limited and they must destroy as much of the mission targets (while also observing secondary missions, such as limiting civilian casualties and property damage) before they must leave the mission area to refuel. Targets appear on a mini-map, and each destination (RADAR bases, chemical weapons factories, etc.) have several buildings which count towards its destruction percentage. Usually hitting a certain target percentage is all that's necessary for mission completion, though occasionally this target is 100% and the player must be careful to eliminate every element on every base.

After a sortie, the player is rated on how effective they were, including speed, accuracy and damage caused to the enemy (including non-mission targets) and are penalized if they let their jet get destroyed (which happens at zero fuel or zero health) or if they eliminated any friendly units, which tend to have brighter/greener coloration, or Zaraq civilians. The player then starts the process over with the next sortie, until the mission target has been reached. Most missions have multiple areas the player must visit for their mission goal, and may only visit one per sortie.

Each region has a finite amount of resources, including enemy troops. Players can use the map to see how many enemy units are left on the map: If the player has remaining fuel and no more mission targets during a sortie, they may decide to chase these enemies down. These are generally non-crucial to missions, but may enhance the player's final score. 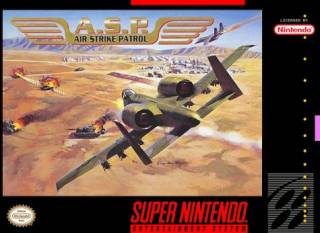