As the "Renegade Ops" rogue military group, you must save the world from the terrorist organization Inferno in this arcade top-down vehicular shooter from the studio that brought you Just Cause 2.
Xbox 360 Games Store PlayStation Network (PS3)

Renegade Ops is a top down dual-joystick shooter developed by a 15 man team at Avalanche Studios and was part of the PSN Play program.

Players can choose to play as either Armand, Roxy, Diz or Gunnar. Each character has a different vehicle and different abilities, but controls the same. The left stick is used to move while the right stick is used to shoot. 3 face buttons are used: one for each character's special ability, the other to speed up the vehicle and the third and final button is used to fire missiles. Controls are about the same when piloting a helicopter except that players must dodge obstacles and can do flips.

Levels have both primary and secondary objectives. These objectives range from rescuing hostages to blowing up tanks and ammo depots. Each mission is timed and players are awarded points for killing enemies, completing objectives and doing flips in the helicopter. During missions, players can pick up items that can give them temporary damage boosts, increase their vehicles' life or weapon range.

There are three difficulties -- Casual, Normal and Hardcore. Casual gives players unlimited lives, but eliminates the leveling and upgrades of the two higher difficulties.

Renegade Ops has a simple story, similar to those found in 80s movies and video games. It's told through vignettes at the beginning of each mission. The evil Inferno is hell-bent on ruling the world and terrorizes Europe by blowing up Catalonia City. International governments are too afraid to unite against Inferno so General Bryant decides to take matters into his own hands by searching the globe for elite soldiers who would be able to foil Inferno's plans. He finds Armand, Roxy, Diz, Gunnar and, in the Steam version, Doctor Gordon Freeman joins the team as well.

During combat numerous items and pick-ups are dropped by enemy vehicles and defenses. 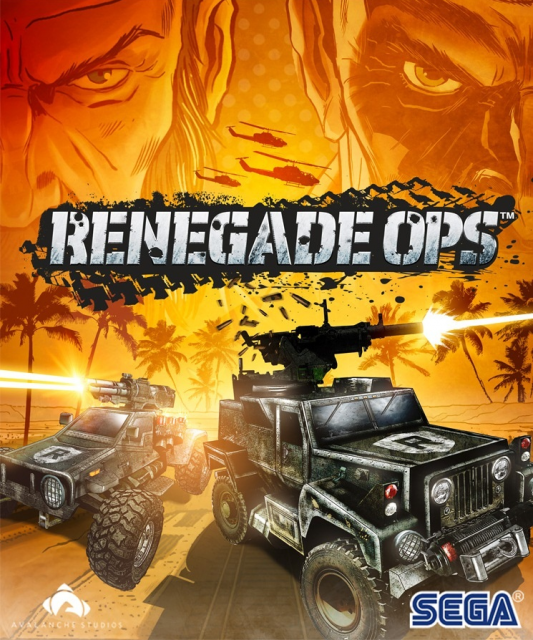