Alleyway is a puzzle action game and one of the four original games released as Game Boy launch titles in the Japan and also later as a launch title in both Europe and America.

The developer of the game is not known with 100% certainty as the game is credited to both Nintendo R&D1 and Intelligent Systems Co., Ltd.; the latter claiming credit for the game on their corporate website without delving into any further details. The fact that Intelligent Systems is often cited as having spun off from R&D1 adds additional confusion and so it is hard to identify who exactly developed the game without further information being revealed.

Alleyway is referred to as a Block Kuzushi game in its Japanese box art, which isn't so much a franchise of its own than a title applied to any Japanese game that contains Breakout's "ball and paddle" gameplay.

Players experienced with such games as Breakout and Arkanoid, will be very familiar with the concept of Alleyway: the player controls a small paddle with the aim of hitting a constellation of bricks with a ball. Each brick disappears once hit with the ball and the goal is to ensure the whole screen is devoid of bricks. Once this is achieved the player then moves onto the next level which becomes that little bit harder to clear. After clearing all of the games 32 stages (24 basic and 8 bonus) the game ends.

The general structure of the game is that the game is split into 8 sets of 4 rounds with each round having its own distinct take on the goal of clearing the screen of all blocks. The first round of the set is always a simple Breakout clone albeit with the occasional different layout of the blocks on the screen. The second round features the same layout of the screen except that bricks now move horizontally across the screen and when the ball comes in contact with the back wall of bricks the players paddle shrinks to half its size. The third round sees the bricks progress downwards towards the bottom of the screen every time the ball hits the paddle a set number of times. The additional challenge now becoming a Space Invaders like game in that the player must clear the screen of all bricks before they reach the bottom of the screen. The fourth stage of a set is a bonus stage in which the ball rather than being deflected upon hitting a brick keeps charging through clearing all the bricks in passes through. Players are given a time limit to clear the stage which if met awards a large score boost that will almost grant players enough points for an additional life.

Should the ball drops below the paddle the player will lose a life, and once all the lives are gone the player must restart from the beginning.

The game also features a cameo from Mario who can be seen entering the paddle upon starting a new game, and every time the player loses a life he appears to jump ship before facing almost certain doom. There were a few other Nintendo subtleties thrown in such as the cameo of certain famous faces each time a bonus stage rolled around as the brick layouts are structured to look like the given character. 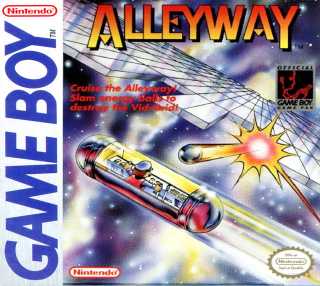