A NES (Famicom) motorcycle game. It is set in a post-apocalyptic world where the player must rescue survivors and defeat enemies.

Mach Rider takes place in the year 2112, where a post-apocalyptic earth is the main setting. The planet has been invaded by evil outsiders known as Quad Runners. A mysterious character, known only as Mach Rider, is decided to help out the ailing planet earth by rescuing survivors of the attack and destroying the Quad Runners in his motorcycle. It is a very fast machine, equipped with machine guns that the player operates. The gameplay also requires the player to accelerate, steer, shoot and change gear.

Mach Rider features three different game modes. In fighting course, the main mode, Mach Rider must advance across the ten different levels in the game destroying the Quad Runners and rescuing survivors, while at the same time attaining a high score. There are also obstacles scattered across the levels; if Mach Rider is destroyed he will reform himself unless the energy bar is depleted, in which case the player loses. In endurance mode, the objective is to achieve a certain distance within a time limit; enemies and obstacles slow the player down, as well as being destroyed. Solo course is pretty much a "cruise mode", you just ride the course with no enemies. Finally, in design mode the player designs courses and layouts to race in any of the previous game modes.

Two versions of Mach Rider were released for Nintendo's arcade-focused Vs. System, splitting Endurance and Fighting courses across two separate games. The title screen doesn't denote any difference between versions.

In the game No More Heroes 2, the Pizza Delivery mini-game bears a striking resemblance to Mach Rider, including spills to avoid and oncoming traffic to deal with. 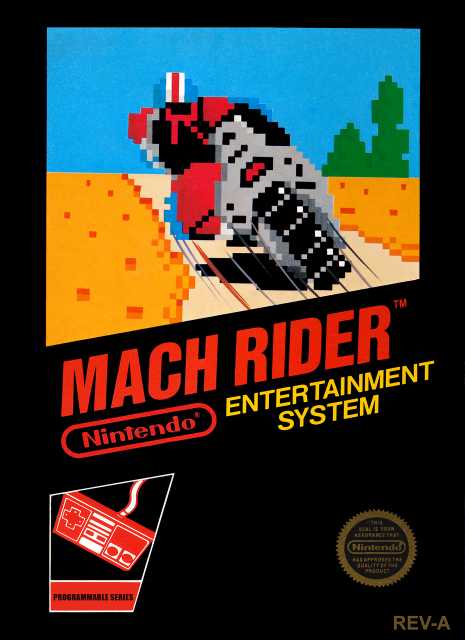