Playing like a combination of Nintendo's Octopus Game & Watch, and the underwater sequences of LJN's Jaws, Kaitei Takara Sagashi (or Underwater Treasure Hunting) tasks the player with diving to an ocean floor to gather treasure while avoiding horizontal scrolling rows of sharks. Play begins with a ship containing the player at the top of the screen. The player scrolls the ship to a desired position on a horizontal axis, and begins to low the diver to the floor. While lowering, the player can only control the rate of descent. The player must therefore gauge the offset scrolling speeds of each rank of sharks before committing to lowering themselves. As a last resort, players may fire harpoons horizontally to kill oncoming sharks for 30 points each.

Once on the ocean floor, players must maneuver their diver over a pot icon, each of which contains one of five random outcomes: 50, 100, 200, or 300 points; or an instant death. Once the treasure has been pulled from the pot, the player must then pull their diver from the ocean floor back to the ship, avoiding sharks as above. Only when the player reaches the ship are points counted. Once all five pots have been removed, the message "NEXT PATTERN" flashes across the screen and the pots reappear on the ocean floor, repeating the cycle until three lives are lost.

Kaitei Takara Sagashi's own title screen makes it known that the game was originally developed by "K'K-TOKKI". Online resources would indicate that an entity known as K.K. Tokki handed Kaitei to Namco as a prototype, which was reworked in large part before being released into Japanese arcades. It is unclear who or what K.K. Tokki actually is; there is a machine and durable goods company under the name Tokki K.K. with offices in Shibuya (Namco is headquarted in neighboring Minato) which is a potential source for the game.

The specific release date for Kaitei Takara Sagashi is difficult to pinpoint. Various sources online would indicate it was somewhere between January and May of 1980, though a general consensus (with wording similar enough to indicate the sources were edited by one individual) indicates it was the second of a triad of black and white games released by Namco before Q3 1980: Navarone, Kaitei, and S.O.S. 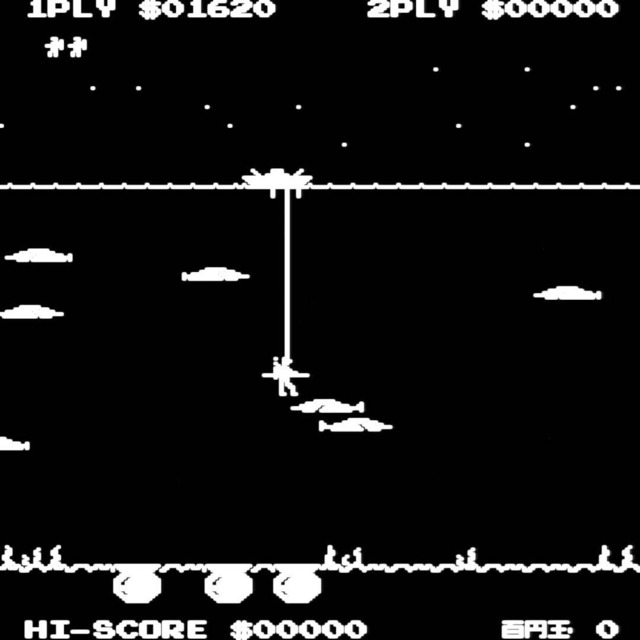