Air Cavalry is a helicopter action game for the SNES.

Air Cavalry is an action game developed by Synergistic Software and published by Cybersoft (GameTek for PAL regions) for the SNES platform.

The player commands a helicopter gunship in three different environments - Middle East, Central America and Indonesia - and must pursue objective targets across a large map. Different targets require differently weaponry and a different approach, and the player can change their craft mid-mission to suit the mission. The game adapts the SNES's Mode 7 technology when traversing across each region. The helicopters include: the OH-6D Defender, the Boeing AH-64 Apache and the AH-94A Valkyrie.

The game features two modes that include a second player: competitive and co-op. Even in the competitive mode, where the only mission objective is to destroy the other player, both players still need to be wary of enemy ground units. 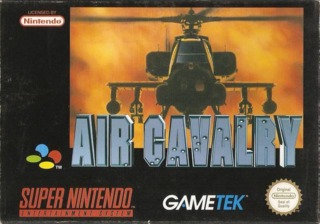