A 1994 action game capitalizing on the recent movie of the same name. The game was initially released for the SNES and Genesis with a Sega CD version releasing later as a bundle with Bram Stoker's Dracula.

Mary Shelley's Frankenstein is an action game in which the player controls Frankenstein's monster as he escapes his restraints and chases after the creator that spurned him, Dr. Victor Frankenstein. The monster is constantly beset by the local peasants of 18th century Ingolstadt, Bavaria, and must make his way through various door puzzles and platforming to escape them and find Victor.

Dracula Unleashed Bram Stoker's Dracula Frankenstein: Through the Eyes of the Monster 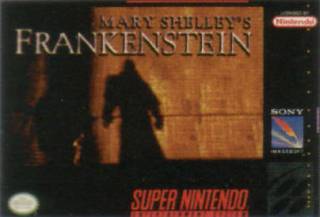