Super Contra, also known as Super C, is the sequel to Contra. In addition to side-scrolling levels like its predecessor, Super Contra introduces top-down levels, which replace the third-person segments of the original. The NES version, uses the same gameplay engine as the NES version of Contra, with some levels not featured in the arcade version.

Super C is the sequel to the legendary run and gun classic, Contra. Bill Rizer and Lance Bean are sent on another campaign against the alien Red Falcon army, which has taken over a military base on Earth. It has gameplay is similar to the orignal, but features some upgraded graphics and top down levels which replace the pseudo-3D third-person stages in the original game. Like the first game, it has a two player co-op mode.

All of the weapons from the original Contra return here, though the Fire weapon has completely different behavior. Like the first game, weapons are obtained by shooting down pods which fly across the top of the screen at certain parts of the levels. In addition to the weapon powerups, the pods can drop a shield that provides a short period of invincibility and a bomb that destroys all enemies on the screen.

The first level takes place in a war torn cityscape overrun by Red Falcon troops. Heavily featuring the new inclined surfaces introduced in Super C, the stage has enemies sniping and throwing bombs from rooftops and buildings in addition to the usual infantry swarms from either side of the screen. The first boss is a helicopter which fires from several guns mounted on its side. After making its first pass, it will fly low while enemy infantry jump out of the back.

The second level is in a top down format. Stationary turrets and tanks with spread fire try to mow down our heroes, along with swarms of infantry. The boss is a tank with three mounted gunners and an extending electrical prod. It uses the prod to trap players against the bottom of the screen.

The third level takes place in a jungle. Infantry snipe and leap down from the treetops and camouflaged turrets pop out of the ground to kill unwary players. While crossing a shallow pond in the middle of the stage, Bill and Lance can duck under the water to avoid enemy fire.

There are two bosses in the Jungle stage. First is a spider tank that fires shots which weave up and down like the Wave Gun from the Metroid series. Players can jump on top of the boss and be safe from its attacks, but will have to jump down to the ground again to attack it. After destroying the tank and traversing a brief sequence where the ground collapses, a wall with rotating turrets will rise out of the ground. The glowing ball in the center is its weak spot, but the rotating guns can also be destroyed to make the battle easier.

The fourth stage is mostly vertical, with ledges and elevators taking the player(s) toward the top of an indoor complex while winged aliens jump down and wall turrets fire from above. The boss is a rack of laser beams that moves along a rail at the top of the screen. It will attempt to trap players against the sides of the arena with vertical waves of fire. Safe spots can be created by shooting out sections of the laser battery.

The fifth level is again mostly vertical, with Bill and Lance climbing a mountain peppered with turrets and plagued by boulders rolling down the inclined surface to crush them. Upon reaching the top, they encounter the entrance to the enemy base, with infantry coming out of doors in the walls and defensive guns popping up from the ground. The boss is an alien aircraft built out of human skulls. It drops animated skulls which skim along the ground from hatches on its side and fires spiked balls.

The sixth level is the second top down section. Hazards include giant spiders, huge alien mouths that pop out of the ground, creatures that circle our heroes, blocking fire while slowly moving in to attack, and gauntlets of holes in the walls that launch spiked balls.

This boss first appears as a line of faces which shoots a narrow stream of bullets. After destroying this creature, another boss emerges from its corpse. This second form shoots small fireballs at the player characters while snake-like creatures weave across the arena from the holes on the sides of the screen.

The seventh level has Bill and Lance moving down through the alien lair. The deadly enemies from the final level of the original Contra make an appearance here, emerging from pods like the ones see during the final boss fight of that game. There are also some large, slow moving purple creatures that take many shots to kill and spray bullets as they come closer and closer. The boss is a skeletal creature that looks similar to the third boss from the original Contra.

The final level has players moving into the heart of the alien infested military complex. Souped up versions of the standard infantry dash in from the sides very quickly, while mouths in the background launch homing shots. A section towards the end has a ceiling that rises and falls, making traversing the pits in the area and avoiding the deadly homing orbs that appear difficult.

Emerging from the ground, the Final Boss appears as an alien skull atop a human female face with spiderlike legs. It's attacks can all be entirely avoided by running against its legs and firing at the head, which will damage it and destroy the shots it fires back. After killing the gruesome thing, a helicopter flies Bill and Lance into the sunset while the credits roll.

Super C on the 3DS VC supports 2-Player via Download Play. The restore points feature will be disabled for that mode. Another new feature exclusive to the 3DS Virtual Console version is the Spectator Mode. A second person can watch the gameplay action on their own 3DS screen without "having" to play the game. 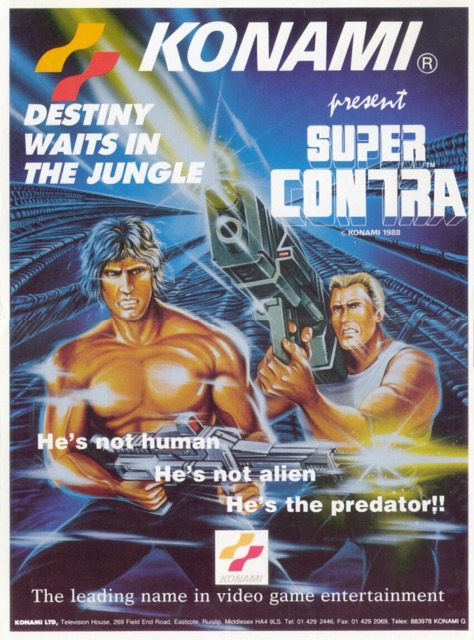