Grab your rocket sled and come inside the arena, where you can play Rocket Ball, Rocket Race, or Rocket War. As fun as it is dangerous, and it's incredibly dangerous.

Rocket Jockey is a 'fictional sport' game developed by Rocket Science Studios and published by Segasoft in 1996. The game takes place in an alternate version of the  past where the sport of the day involves riding around on rockets about the size of horse torsos. Presumably set in the 1940s,  the courses in the game are peppered with fake advertisements for rocket-themed products and services. Rocket Jockey is also notable for it's surf rock soundtrack which includes music by legendary surf rock guitarist Dick Dale, who is best known for the song 'Miserlou', which was also used as the theme song to the Quentin Tarantino film 'Pulp Fiction'.

First, the player chooses a rocket to ride upon. The rockets available out of the gate have negligible differences, but later game rockets have drastic stat increases. New rockets are not unlocked by finishing portions of the single player, but must be stolen from other riders. The player must yank a rival off his rocket, jump to the ground, and fly away on the rival's rocket before he can take it back. Then, they must finish the event with said rocket intact.

All the rockets are rather unwieldy, allowed for only minimal maneuverability, so all three game modes feature pylons around the course which the player can latch on to by shooting harpoons out of the right or left side of the rocket. The player can control the length of the harpoon's grip on a given pylon or object, allowing for quick and sharp turns. Harpoons can also be connected: by latching onto two different things with both harpoons, the harpoons can be linked to effectively tie the objects together. This works for anything: two pylons, another rider and a pylon, a rider and a bomb, etc. Also, enhancements can be made to the chain of the harpoon. Scattered around the course, these upgrades will add barbed wire to the chain, increasing the damage it does to other riders, lengthen the chain, or allow harpoons to be stuck into the ground to turn.

Rocket Jockey was shipped with no multiplayer, but a patch was subsequently released allowing for network play. Unfortunately, the patch was only partially successful and sometimes games were impossible to form. There was no online. 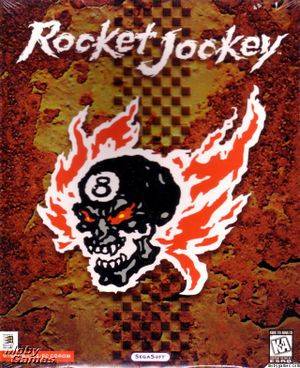