Bucky O'Hare was originally a comic book series, written by Larry Hama and drawn by Michael Golden. An animated television series was produced and aired around 1990, and along with it came the requisite toy line. The anthropomorphic series also spawned a NES game as well as an arcade game. On March 6, 1991, the last episode of the television series was aired. Afterward, not much has been released in the United States. The only Bucky O'Hare related media has been the release of the original series on Region 2 DVD, and a short 3-D cartoon was made by renowned comic artist Neal Adams.

The NES game was developed and released by Konami and saw Captain Bucky and his crew appear on a home video game console for the first and only time. The game was hailed as Konami's answer to Mega Man and certainly shared many features in common with the series. It was known for it's good level of challenge that was not impossible like a lot of games at the time, but was certainly not easy by any measure, and also its extremely catchy soundtrack and varied settings. In 1992, a Bucky O'Hare arcade game is released, much different than the home console version.

Bucky O'Hare is a green hare that captains a ship run by other mammals. He helps lead the United Animals Federation when the evil Toad empire (run by a computer known as KOMPLEX) starts a war with the mammals. In this game, Bucky's crew are taken captive and Bucky must fight to release them, only for them to be taken prisoner once more after Bucky initially rescues them all. Bucky must then battle through several planets to rescue them all, and then take the fight to the Toad Marshall.

As previously mentioned, the gameplay was very similar to that of the Mega Man series. The game is an action-focused side-scrolling platformer featuring Bucky or one of his crew as the playable character. The game has many jumping puzzles in it, along with other obstacles that can cause instant death if the player is not careful. On top of this, there are many foes for bucky to contend with such as the classic toads and a good variety of Bosses.

Early on in the game Bucky's crew are taken prisoner, and Bucky must fight to rescue them all. Each crew member is designated to a planet, and each planet is a series of levels leading up to a boss fight which upon completion will return the captive prisoner to the crew. Later in the game, the player can switch between Bucky's crew in game on the fly, to choose a character that suits them or to overcome certain in-game obstacles. Each member has a fairly unique ability. Blinky, for example, can hover above ground temporarily to traverse pits and other perils. Dead Eye Duck has a very useful gun that shoots multiple bullets in a spread arc, Bucky has a charge jump which allows him to reach higher vertical jumps than most. Jenny can charge up a psychic ball of energy which the player can control and move around the screen for a short time before it expires. Willy has a powerful gun which can be charged to become very powerful.

The side scrolling was interesting in that the player could go left if they missed something they would have liked, but this could be unwise as the game usually respawns enemies the player had just defeated if the player moves the screen beyond their position. Luckily though, the game featured a health bar system so the player could take several hits from an enemy before perishing. Also, the player could continue from whatever level they started at even if they run out of lives, but their score will be reset.

Bucky O'Hare featured a password system so the player could write down a password and the game would recognise how far through the game they were.

A green hare, captain of the space ship The Righteous Indignation. Along with his fellow mammals, he is a high-ranking soldier in the war against the Toad empire. His personality of typical of many heroes: a strong feeling of patriotism toward the plight of his people, and strong leadership attributes.

A cyclops robot who constantly used the phrase "Calamity and Woe" whenever something bad happens. His personality is likened to several other famous robots, mostly a little robot from Lost in Space....

A duck with a missing eye and four arms, Dead-Eye's personality is very similar to Donald Duck: quick to anger, and very aggressive.

A cat from another planet. Is first mate on the ship The Righteous Indignation, and has secret psychic powers.

The only human in the crew, Willy accidentally teleported onto The Righteous Indignation, and is the ships engineer. 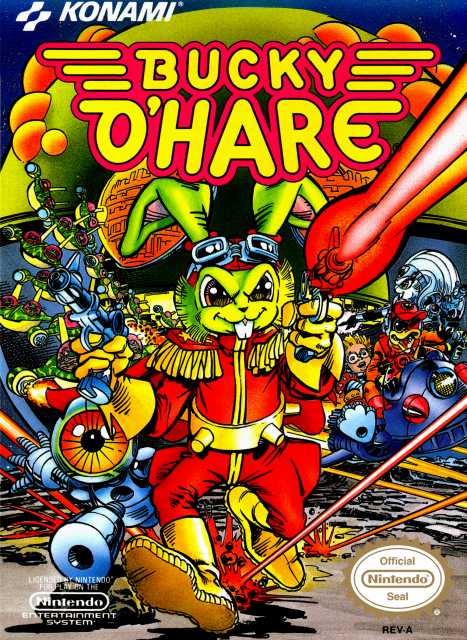