Jak II, sometimes subtitled Renegade, is the second game in Naughty Dog's Jak series and a significant departure from the original game Jak and Daxter: The Precursor Legacy. Rather than being a mostly on-foot collectible-focused platformer, Jak II features a lot more vehicle sections and an open city to explore, not unlike Grand Theft Auto III. The tone of the game shifted also, moving to a darker, grittier story and environment with more sci-fi aspects, rather than the cartoony and picturesque islands of the original.

Jak II was released in late 2003 for the PlayStation 2. It was eventually re-released in the Jak and Daxter Collection which was compatible with the PlayStation 3 and PS Vita. Daxter, a separate PSP game released three years later in 2006, is a prequel that leads directly up to the events of Jak II.

The gameplay in Jak II differs greatly to Jak and Daxter: The Precursor Legacy as well. Although the core platforming elements remain, it features a GTA-style world which Jak can roam around in freely, "HiJak" various hovercars, and obtain weapons through the course of the story. Overall, both the gameplay and story have a much darker feel than the first game and this is exemplified by the Dark Jak transformation. Dark eco is collected, and when enough is procured, the option to become this alter ego temporarily is made available. When transformed, Jak takes on a more animalistic look and has far stronger melee attacks, however he cannot use his projectile weapons. Dark Jak's abilities can be extended if Metal Head Skull Gems are collected and traded. The game is renowned for its wide variety of gameplay, venturing into the genres of action, platforming, racing, on-rails shooting, rhythm action, skating (on a Hoverboard), Mech fighting and nigh on innumerable others.

Shooting in the game is handled by an auto-targeting system. Jak shoots what he's facing with a tap of the R1 button, but the player can see what he's aiming at and adjust his position accordingly thanks to a laser sight mounted onto what is technically the game's only weapon, the Morph Gun.

The Morph Gun is awarded to Jak by Krew part-way through the story and has four different transformations: the shotgun-like Scatter Gun, the Power Blaster, the machine-gun esque Vulcan and the ironically titled Peacemaker that Jak receives near the end of the game.

Haven City is a free roaming environment, and as a result, Jak can hijack the different types of hovercars and hoverbikes that crowd Haven City's streets. Although there were limited hoverbike sections featured in The Precursor Legacy, the basic handling is the same. One major difference is that Jak can hover at two levels; either close to the ground or several meters in the air, which helps him navigate the the city much faster. There are also hoverbike races which Jak can compete in at the Stadium, and though they must remain just above ground, the handling is tighter and acceleration and top speed are vastly superior. Without the use of vehicles, it would be difficult to traverse the city in anything approaching a reasonable time, so acquiring them becomes second nature and a core element of gameplay and simply getting around.

Just as in Grand Theft Auto III, if Jak draws the attention of the police, the Krimson Guard, the city goes on alert. By bumping into a guard or in story driven moments, Jak can begin an alert that begins with individual guards trying to shoot him down and escalates into Guard hovercraft using their powerful lasers to finish the job. The player can escape alert by getting out of the red alert circle on the minimap and staying hidden until the guards relent.

Jak II is the sequel to Jak and Daxter: The Precursor Legacy and picks up the story a few hours after the first game finished. The mysterious vehicle found at the end of the first game is brought to the home of Samos the sage along with the Precursor ring that was also found. Jak manages to activate the vehicle which violently transports Jak, Daxter, Samos and Keira into a strange world. Upon awakening, Jak is immediately arrested by the Krimson Guard under the rule of Baron Praxis. Jak is subjected to torturous experimentation until two years later Daxter finds him in jail and frees him.

Jak joins a small resistance group in the slums who want to overthrow the tyrannical rule of Baron Praxis. The members include Torn, the hardened leader, an old man known as Kor, a young unnamed boy, and Ashelin, who is the Baron's daughter.

Wanting revenge, Jak starts to work for a variety of characters with the sole aim of getting him closer to meeting his foe. By working his way up the ranks of the resistance, Jak comes into contact with the leader of the group known as 'The Shadow', who turns out to be a younger Samos the sage. It is discovered that the Baron is dealing Eco to an evil race of creatures known as the metal heads to keep them from invading and destroying the city. The resistance are harboring a small child referred to only as 'The Boy' or 'The Kid' who has the ability to open the tomb of the ancient leader, Mar, which contains a Precursor stone which can be used for great power.

Jak enters the tomb instead of the boy and upon finding the stone comes into contact with Baron Praxis who overpowers Jak and takes the stone for himself. It is then revealed by Samos that Praxis intends on breaking the stone to find its power which, unbeknownst to him, would cause incredible destruction.

Jak manages to win the class one race against Praxis' right hand man, Erol, and gains the prize of the opportunity to meet the Baron himself. Instead of Praxis, Jak finds Ashelin who refuses to believe allegations against her father but is forced to believe what she hears after finding out what the breaking of the Precursor stone would do. She tells Jak that the crime lord Krew, who Jak had been working for, has built a bomb powerful enough to destroy the metal head nest and the Precursor stone in one. Jak finds Krew and confronts him, a battle that leaves Krew near death. Krew sets off the bomb in an attempt to kill Jak, but Ashelin provides an escape for Jak just in time, leaving Krew to perish.

Jak then confronts the Baron at a construction site but is interrupted by Kor, who demands that Praxis hands the Precursor stone to him. It is here that Kor's true identity as the metal head leader is unveiled and he kills Baron Praxis before heading to the metal head nest. Before dying, Praxis tells Jak that Jak has the power to destroy Kor and that the precursor stone is on a second bomb. Daxter disarms the bomb and obtains the stone. Using Mar's cannon, Jak and Daxter enter the nest for a final confrontation with Kor who has both the boy and the rift ring from the beginning of the game. Kor reveals to Jak that the boy is in fact him as he was born in the future and sent back in time to live the events of the first game in order to be ready to face Kor on this day, he also tells Jak that his attempt is futile now as the Dark Eco inside him prevents him from using the Precursor stone to unleash its power. After a grueling battle Jak proves Kor wrong and beats him. In a last attempt at saving himself, Kor tries to destroy the rift by ramming into it, but ends up dying upon impact. Young Jak touches the Precursor stone and becomes imbued with Light Eco, which explains why Jak was not destroyed by the Dark Eco. Young Samos is ordered to go back in time to watch over Jak and the two quickly manage to get through the gate before it collapses. The game ends with celebrations at Daxter's recently obtained bar.

The game's setting is the sprawling metropolitan urban area Haven City, the large, angular, metallic structures of which stand in stark contrast to the original's bright, colorful, rural locales. Haven is a technologically advanced, though dystopian, vision of the same land's future (as Jak discovers around two thirds into the story).

The authoritarian Krimson Guard, under the command of Baron Praxis and his corrupt, deceitful right hand man Erol, run the various zones of the main city, which include a shanty town, a mystical marketplace, a stadium (used for races), a slum, a central area where the Baron's palace resides and a waterfront boulevard surrounded by businesses. There are also many districts outside the city boundaries that are used for missions, such as a pumping station, ruins of Sandover Village and the beautifully realized and atmospheric Haven Forest.

Jak II is widely known for featuring a darker and much more pessimistic tone, emphasizing the newer "edgy" attitude of the series. Such changes like equipping Jak with firearms, along with the use of mild profanity (such as Daxter's infamous use of the word "damn") made the game appear somewhat darker than the previous. As a result of the light profanity and violence, Jak II was the first Jak title to achieve an T rating from the ESRB. 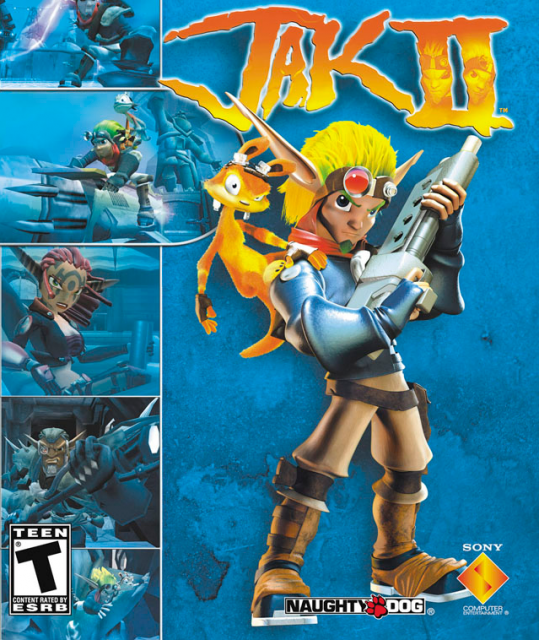