The first digital adaptation of the collectible card game of the same name, bringing the Pokémon-based card game experience to the handheld while featuring over 200 cards (most from the Base Set and the first two Expansions) and a single-player Story Mode.

Pokémon Trading Card Game (known in Japan as Pokémon Card GB) is a virtual collectible card game and fantasy RPG developed by Hudson Soft (along with Creatures) and published by Nintendo for the Game Boy Color in Japan on December 18, 1998, with an overseas release in the year 2000 (April 10 in North America and December 15 in Europe).

A digital adaptation of the collectible card game of the same name (itself based on the Pokémon RPG series and media franchise), Pokémon Trading Card Game recreates the real game experience (including most cards from the Base Set, as well as both the Jungle and Fossil expansions) while having players acquire cards and build their custom card decks in the game's single-player story mode.

Set on an island where the card game is popular, the game has players control a young newcomer to the card game, as he makes it his quest to collect the eight Master Medals from the island's eight elemental-based Clubs and challenge the four Grand Masters at the Pokémon Dome (a story reminiscent of the original games) to acquire the four Legendary Cards. Along the way, players can acquire new cards for their repertoire by opening booster packs, performing special tasks, or trading with other players (using infrared communication from either the GBC's infrared port or the built-in infrared port of the Japanese version's cartridge).

Although released for Game Boy Color, the game can be played on a classic Game Boy, and the game includes a custom border for the Super Nintendo Entertainment System's Super Game Boy peripheral. It also supports linked multiplayer battles using the Game Link cable and allows players to print copies of the in-game cards using the Game Boy Printer.

The game later received a Japan-only sequel, known as Pokémon Card GB2: GR-dan Sanjou!, and received a digital re-release for the Nintendo 3DS (as a Virtual Console title) in 2014 (July 10 in Europe, November 13 in North America, and December 24 in Japan).

Rather than being a straight card fighting game, Pokémon Trading Card Game translates the popular trading card gameplay into the style of the Pokémon role playing game franchise. The game retains many aspects from the previous video games, including "Club Masters," which are essentially the same as Gym Leaders, save for the fact that they can be challenged in any order. The "Grand Masters" (trading card game's " Elite Four") are challenged after beating all eight Club Masters, with a rival also challenging the player.

The major difference in gameplay is, obviously, the trading card aspect. Several card types can be chosen: Pokémon cards, which represent the creatures themselves, energy cards, which are used to power moves and abilities, and trainer cards, which represent items and trainer abilities (although there are other miscellaneous types). Pokémon cards are the main cards, and are on which energy and miscellaneous cards are equipped. Energy cards enable the Pokémon to attack (i.e. what type, damage). Trainer cards can do a variety of effects including reviving Pokémon or damaging an opposing Pokémon.

Classic "Gotta Catch 'Em All" gameplay is intact, with players collecting over two hundred cards. Most of these cards previously existed in physical form, however some were created specifically for the game. It is possible to trade cards with non-playable characters, a key difference from the role playing games on which this game was based. Other options in the game include a link cable battle mode and the ability to print out cards using the Game Boy Printer.

Another key part of Pokémon Trading Card Game is its non-linearity when compared to the role playing games. The player can fight the eight Club Masters in any order, the only requirement is to have a deck of Pokémon cards (as there are no levels). The game does not penalize losing, but winning gives the player more cards to use (and thus, opening up new options).

There are only a few ways in which the gameplay in this Game Boy Color version differed from the rules of the actual Pokemon trading card game. 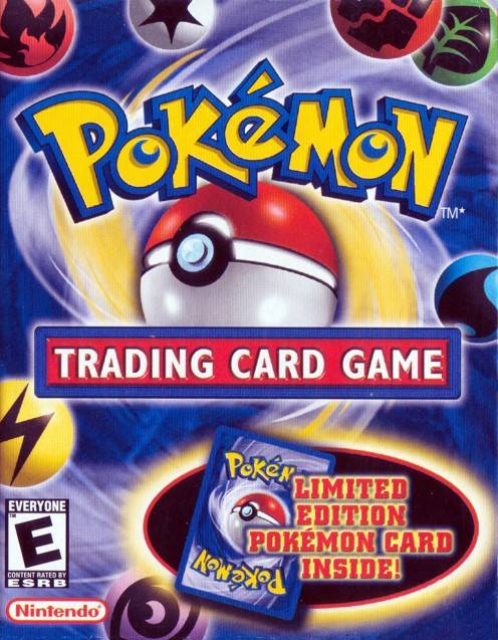