NBA Hangtime (also known as NBA Hang Time) is a belt-scrolling basketball game developed and released by Midway for arcades in April 1996.

A sequel to the 1993 game NBA Jam (and its 1994 Tournament Edition update), NBA Hangtime features an updated NBA roster for the 1995-96 season (now with each team having a five-man roster to choose from), new player abilities (such as spin moves, fadeaway shots, alley-oops, "double-dunks", and the "Team Fire" buff), an updated cheat code system (similar to Kombat Kodes from Mortal Kombat 3), an updated persistent profile system (using longer names and four-digit PINs), and overhauled higher-quality graphics and audio (with Chicago Bulls announcer Neil Funk doing the voice commentary).

The game also features the "Create Player" system, in which players forego using their credit to play the game to instead create and update their own custom basketball player for their persistent profile. Along with a custom name, uniform color, wacky head, and a "nickname" for the announcer, players can distribute their attributes from a limited point pool (which gets larger the more that player wins).

The game later received ports for the Super Nintendo Entertainment System and Sega Genesis on November 1996, both ported by Funcom and published by Midway themselves (rather than Acclaim, who previously published ports of NBA Jam). It was later ported by Midway Studios San Diego and Director's Cut International to the Sony PlayStation, Nintendo 64, and Windows PCs in early 1997.

Earlier versions of NBA Hangtime (as well as the home versions) included a NBA trivia quiz after each game for bragging rights, additional attribute points (home version only), and a chance to win prizes (arcade version only). The game later received an update in November 1996 as NBA Maximum Hangtime, updating the roster to match the 1996-97 season while adding new secrets and a new "hot spots" system, where each basketball player has a hidden spot on the court where they shoot more accurately. It was later succeeded by NBA Showtime: NBA on NBC. 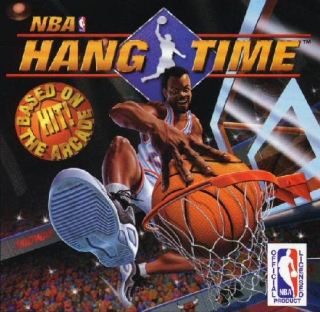