Largely reminiscent of Ocarina of Time, the game plays like a Zelda-lite adventure. Due to a combination of this, goofy dialogue, and a variety of technical issues; the game is not remembered fondly.

Hercules: The Legendary Journeys is a Nintendo 64 and Game Boy Color game from Titus (based on the hit television show). It centers around one of the most popular Grecian myths, that of Heracles, or, as he is better known, Hercules. The game involves a combination of skirmishes with random enemies and bosses, elementary puzzles, and numerous trading sequences and side quests similar to the ones found in Legend of Zelda: Ocarina of Time. The player can also play as two of Herc's friends, Lolaus and Serena (or the Golden Hind, as the half woman, half horse character is referred to in the game): they each have their own unique attacks and weapons. Legendary Journeys is known to have many bugs and technical issues (alongside its clunky controls) that make the game frustrating and unnecessarily difficult in numerous places. This game proved to be another high profile failure for the once beloved Titus as it continued to plunge deeper into the territory of poorly developed action/adventure games; directly following the release of the critically-despised Superman 64.

Though Hercules is the primary player character, the player does take control of Lolaus and the Golden Hind during certain moments of the game. Each of these characters have a unique control scheme; unfortunately, perhaps due to a lack of care in the game's development, the other two characters are both exceedingly difficult to control and considerably weaker than Hercules. Nonetheless, the character's attributes are listed below: 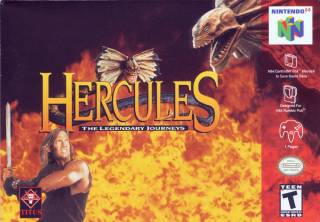