Developed by Cyclone Studios, Uprising: Join or Die is a 1997 first-person real-time strategy game that combines gameplay elements of the FPS and RTS genres.

Released by The 3DO Company on October 17, 1997, Uprising: Join or Die is a PC real-time strategy game from Cyclone Studios that mixes traditional RTS mechanics with elements of fast-paced first-person shooters. Many of the hallmarks of the real-time strategy genre are in evidence, such as resource gathering, base building, and unit production, however the player conducts these activities not from the more traditional and detached isometric perspective, but rather from the first-person perspective of their Wraith, a personal mobile command vehicle and weapons platform that can actively participate in battle. Most missions require the player to properly manage their various holdings and command allied units effectively while also using their Wraith to influence the outcome of combat engagements to the best of their ability. The capabilities of units, structures, and the Wraith can be upgraded over time, and in addition to its campaign mode, Uprising features a quickplay single-player option and multiplayer.

At the advent of mankind's discovery of reliable space travel, the denizens of Earth are a divided people. Though some predict that man's newfound ability to explore the stars will bring the world's population together for the greater good, for the most part the various factions and ideologies of Earth begin to claim and settle worlds for their own purposes rather than cooperate as a cohesive group. One fateful day, however, the entire human population of the planet Albion is destroyed by an unknown force, and in an unprecedented show of solidarity, humanity creates a vast military government organization to seek out and defeat this mysterious aggressor. They encounter a belligerent race known as the Swarm, and reports sent from the front lines paint a picture of a successful war effort against alien aggressors.

Over time, signs begin to emerge that the military venture sent forth by Earth may not be completely forthright in its communications. Third-party reports tell of usable alien technology being recovered from Albion, rumors that the military vehemently denies. The entire planet of Albion is placed under quarantine, supposedly due to radioactivity, and as the war drags on many begin to question the veracity of the milatary's version of events. Some wonder if the war is truly still being fought, while others wonder if it ever was. Many who speak loudly against the military's behavior disappear suddenly. Eventually, the military grants General Caston the title of Emperor, and despite a huge public backlash, the Imperium, as it comes to be called, is able to quickly put down anyone who openly rebels against them.

The player character of Uprising is a young man from the planet Caliban who has successfully managed to avoid conscription by the Imperium through a combination of intellect and combat prowess. His actions eventually bring him to the attention of an anti-Imperium rebel group, who, in recognition of his potential, decide to give him further training. It is precisely because of this training and instinctive competence that the player is chosen to pilot the Wraith, a highly advanced Imperium weapon and command vehicle appropriated by the rebels. With only one Wraith known to exist, the rebels plan to use it as a spearhead in their fight against Imperium, believing that they have a technological advantage over their opponents for the first time.

Uprising is controlled using the keyboard and mouse, and movement options for the player's Wraith can be set up to mimic the popular WASD control scheme used by most PC first-person shooters. The mouse is used primarily to control the player's perspective, while the left and right mouse buttons fire the Wraith's primary and secondary weapons, respectively. The Wraith's secondary weapon can be switched quickly either by pressing the number key associated with a particular weapon or by pressing the Enter key, which brings up a scrollable list of all weapons currently available to the player. Major base-related actions, such as calling in troops or placing turrets, can be accessed at any time via the function keys, while buildings can be placed, repaired, and sold through the Satellite Overview interface, which can be accessed with the O key.

Missions in Uprising's single-player campaign are, for the most part, structured around building and fortifying bases in order to amass enough offensive capability to attack, defeat, and claim enemy bases. Unlike many RTS games, bases must be built upon predetermined points on the map. By positioning the Wraith over a claim square, players can call down a Citadel, which allows for additional structures to be built at that location. The number of structures that can be built at any one control point can vary, and the resources that can be drawn from them are likewise finite. In order to augment resource generation and building capacity past what is currently available to them, players must scout and claim additional base locations, oftentimes by force. A scenario will typically end once all base locations are under player control, though occasionally missions will have other objectives as well. After each mission, the player is granted currency with which to upgrade units, structures, and their Wraith.

Unit deployment is somewhat unique in Uprising, as the player does not simply commission unit construction. Once a unit-producing building has been established, a meter associated with the unit in the player's HUD begins to charge. When this meter is fully charged, the player can teleport that unit to their location, at which point the meter must recharge before another unit of that type can be called in. Possessing more than one building for a particular unit allows for multiple charges to be built up simultaneously, thus allowing the unit to be used more often. Other than the player's Wraith, Uprising features only four player-controlled units, though all of them can be upgraded. These units are typically possessed of particular strengths and weaknesses, making it fairly important to take into account the circumstances before deploying them. Infantry units, for instance, are weak against most other units, but extremely effective at destroying structures.

As a physical presence on the battlefield, the player's Wraith is a crucial gameplay component. In addition to functioning as the player's main means of interacting with units and structures, it is also the most powerful and versatile unit available to them. Unlike A.I.-controlled units, the Wraith is extremely maneuverable and can carry a large number of weapons, which can be switch out as needed. It can be fully repaired and rearmed at any friendly base, and the player also starts each mission with a certain number of lives, meaning that even when destroyed, the Wraith can be respawned at the nearest base provided the player has lives to spare. In addition, units can only be spawned within visual range of the Wraith, so by necessity it must always participate in offensive maneuvers. Though it happens only rarely, a mission may also require operating the Wraith without the opportunity to build bases.

Accessed by hitting the O key, the Satellite Overview interface is an important tool for a number of reasons. It contains a larger overhead map than is available to the player in their standard view, and apart from the Citadel, which can be called in with the F9 button, it is the interface through which all non-defensive base structures are bought, repaired, and sold. It contains other useful information as well, such as the current untapped resources at each base, and the current status of all buildings at a selected location. Furthermore, the player can set navigation points from the Satellite Overview and assume turret control of a specific Citadel by double-clicking its icon, which is often faster than simply cycling through all available Citadels with the F12 key.

At the start of Uprising's single-player campaign, the player possesses only two weapons: the Gatling Laser and Limited Heat Seeking Missiles. With funds earned from completing missions, the player is able to purchase up to twelve additional weapons as well as extra durability for their Wraith. All weapons, including the starting weapons, have three tiers, with each successive tier being more effective than the last. Power to the Wraith's weapons can be manually adjusted during missions through the energy triangle, which allows players to dictate the distribution of power for their Wraith's three subsystems: weapons, shields, and engines.

Structures in Uprising are all built around claim squares, with the Citadel being a prerequisite purchase for any other building type to be constructed. Aside from defensive structures, which players can, to an extent, position where they choose, all buildings must be placed on designated construction sites located close to a claim square. All building types save Booster structures have some manner of upgrade associated with them, though in the case of unit-producing buildings these upgrades improve the units they generate rather than the building itself.

Reaction to Uprising upon its release was generally favorable. GameSpot reviewer Michael E. Ryan gave the game a 7.1, calling the game's first-person RTS gameplay "surprisingly fresh and addictive." Ryan's main criticisms of the game revolved around difficulty, as he found the game's campaign to be unforgiving and its control scheme to be too complex. PC Gamer's Dan Bennett thought even more highly of the game, giving it an Editors' Choice award. In contrast to Ryan's review, Bennett did not find the game's controls to be overly complicated, instead stating that they were "only a little more involved than your average action game's." He also made no negative remarks regarding the game's difficulty. Bennett's positive comments were largely similar to Ryan's, as he praised the game for combining traditional RTS mechanics and fast-paced action in an engaging way. 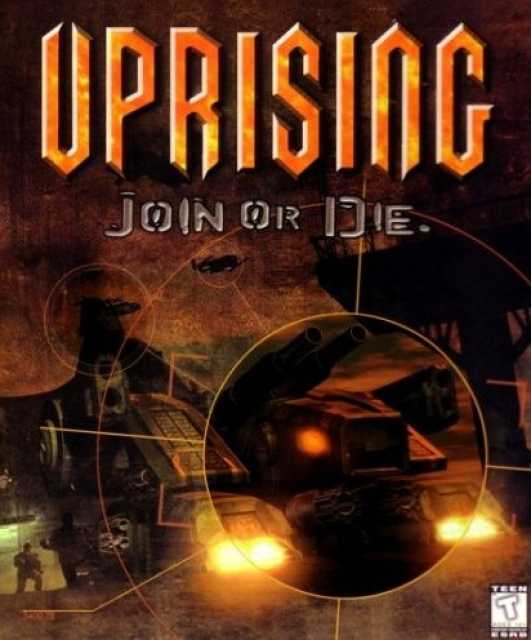