A sequel to the original Bubble Bobble title from Taito, featuring the now human Bub and Bob. It incorporated the use of Rainbows as both a weapon to defeat enemies and as a platform to climb the levels.

Rainbow Islands is the official sequel to Taito's Bubble Bobble, once again featuring Bub and Bob (a.k.a. Bubblun and Bobblun), who returned to their original human forms at the end of Bubble Bobble. This time they are charged with rescuing the titular Rainbow Islands from an entity named Dark Shadow.

The game was originally released as an Arcade title in 1987 but has been ported to several home computer systems including the ZX Spectrum, Commodore 64 and later the Amiga and Atari ST. Several other iterations have also been released on the early 8- and 16-bit consoles.

A platforming game at its core, there are ten islands to beat (dependent on the platform), each one with a different theme that become progressively more difficult.

Rainbow Islands was originally an arcade release but has been ported to several home consoles and computers, Including The Commodore 64, ZX Spectrum and Amstrad in 1989 by Ocean Interactive. The Amiga and Atari ST versions were also ported by Ocean Interactive in 1990. Taito converted the game to the Sega Mega Drive in 1990, the NES in 1988 and the Sega Master System in 1993.

The Sega Master System version suffers from a glitch making it impossible to reach the 8th Island and thus impossible to complete the game.

The Famicom/NES version in Japan and US had original levels and graphics and differs greatly from the more faithful European port.

The Mega Drive version, called Rainbow Islands Extra, shuffles the levels around - e.g. Darius World instead becomes the first world. The player can choose to switch back to the original level order in the options menu.

Later releases with upgraded visuals were released in 1996 for the PlayStation, PC and Sega Saturn.

It appeared on Xbox Live Arcade in 2009, again with newer upgraded visuals.

The aim of the game is to scale to the top of each level. Using the main characters' ability to cast Rainbows, the player can use these as platforms to advance up the level. The Rainbows can also be used as a weapon to defeat enemies by trapping them under the Rainbow and then jumping onto it, breaking it and killing the enemy in the process. The added pressure of each level sinking into the sea means the player has to work their way through the level as quickly as possible.

If a rainbow kills an enemy after it has been fired, rather than killing an enemy by collision as the rainbow is fired, it causes the enemy to spawn a diamond. By collecting all 7 diamonds (one of each color of the rainbow) an extra life is gained. In addition a giant diamond will spawn upon defeating the boss at the end of a stage.

Collecting all of the giant diamonds results in having 3 extra islands to play in some releases of the game.

As well as featuring the characters from Bubble Bobble, the game also shares many of the collectibles from the game, such as:

Other items from Bubble Bobble that are only for points include: Rings, Bracelets, Colored Lamps, Canes, Colored Bottles and diamonds.

Other items of different rarity also appear throughout the game such as the Book, Rainbow Necklace, Clock and Blue Goblet.

The arcade release soundtrack sounded very similar to the song "(Somewhere) Over The Rainbow" from the TV musical "The Wizard Of Oz". This soundtrack made it into the Japanese versions of the Famicon and Mega Drive releases as well as the European and US releases on Commodore 64, Amiga, Atari ST, ZX Spectrum and Amstrad.

In later releases, such as the Sega Master System, NES and PlayStation, the music was changed subtly to prevent any copyright infringement. 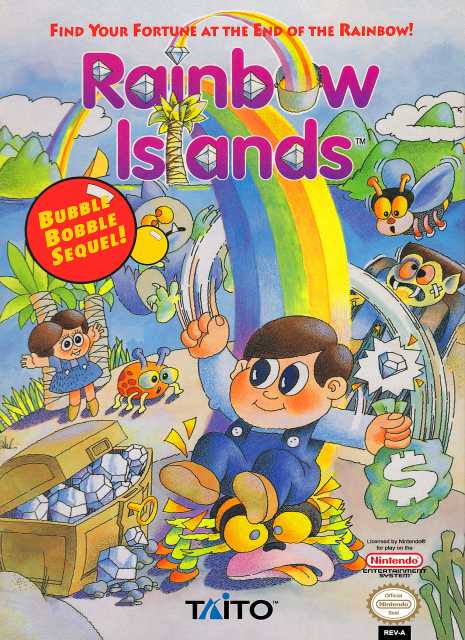