Elite Riskbreaker Ashley Riot tracks the bloodstained trail of a mysterious cult leader through the mystical city of Lea Monde, in this cult classic action-tactical-RPG hybrid from Squaresoft.

Vagrant Story is an isometric action-RPG by Squaresoft, set in the Ivalice universe established by Final Fantasy Tactics. First released in February 2000 for the PlayStation, it was highly praised by critics, and still has a devoted cult following.

The game was produced by Yasumi Matsuno, led artistically by Akihiko Yoshida and musically scored by Hitoshi Sakimoto, the three of whom collaborated on several other acclaimed Square projects, such as Ogre Battle and Final Fantasy XII.

The game tells the story of Ashley Riot -- an elite agent called a Riskbreaker -- as he follows the trail of mysterious Mullenkamp cult leader Sydney Losstarot through the ruins of the fabled and magical city of Lea Monde.

Gameplay may be roughly described as combat-intensive dungeon crawling with deep weapon and armor customization as its primary focus (along with the occasional box puzzle and platforming sections). There are an intimidating number of elemental affinities and weapon types, a largely mysterious weapon synthesis mechanic, and combat that focuses on chaining attacks together with rudimentary timing.

The combat system in Vagrant Story is highly unique. On the press of the attack button, a wireframe sphere appears around the main character which represents the attack range he has with the currently equipped weapon. The player is then able to target the enemy's individual body parts which fall under this sphere. Attacking each body part can yield different results, as they can have different defense points and weaknesses.

The game introduces the concept of Risk, where the player is free to create a chained attack combo for as long as they desire at the expense of an increased chance that a subsequent attack will miss. Using combo attacks activated by pressing face buttons at the designated time, the player can focus on specific limbs or the enemy in general while attacking to maximize damage output. The Risk system encourages a play style in which the player is careful to stop attacking after a few hits, subsequently giving the enemy an opportunity to attack, thereby balancing the game. It also offers the player an emergency last-ditch effort by allowing them to continuously attack an enemy without interruption if no other strategies appear to be effective.

Complementing the chaining abilities are the defense abilities, which like chaining relies on timing. Pressing the allocated defense button precisely when the enemy's attack connects will activate the defense move which have varied results (such as reducing damage by half or reflecting damage) based on the ability allocated to that button.

Another core aspect of the game's combat system is the concept of enemy and weapon affinities. As you use a specific weapon (ie., Short Sword) against a specific type of enemy (ie., Dragon), the weapon's effectiveness against that enemy type increases. Likewise, when using that same weapon against a different enemy type (ie., Undead), the weapon's effectiveness towards Dragons would be weakened. By the end of the game, most successful players will have specific weapons prepared for specific enemy types and will switch between them all as the situation requires.

Vagrant Story features a synthesis system, which allows the dismantling and reassembling of weapons and other equipment that drops during the course of gameplay. Lea Monde contains six different workshops at which players can combine metals to make stronger gear. Crafting weapons is more in-depth, allowing for a higher level of dismantling and reassembling, while armor crafting mostly involves combining of gear to make higher quality versions, or new gear entirely.

The order of material quality in the game goes as follows: wood/leather, bronze, iron, hagane, silver, and damascus. The quality of a weapon specifically is important, as it helps determine the amount of durability points (or DP) is available to a weapon before it will break. DP can be repaired as any of the workshops. Dismantling a weapon can produce various spare parts (blades, hilts, mace heads, etc.) to combine into new weapons. Each piece of the weapon will carry a specific material property of metal to it (including wood, although it is not a metal). Combining different materials, such as mixing bronze with iron, can increase the type of metal being used for the weapon.

Gems can also be attached to the various weapons and armor you create which will give different attributes, such as piercing damage, blunt damage, and even stat boosts in strength, intelligence, etc. The gems generally drop from either the monsters in the world or become available after dismantling a weapon.

Three rare weapons in the game are available after reaching 100% game completion and finishing the required tasks to gain possession of them. These weapons (The Hand of Light, Rhompaia, and Holy Win) contain some of the most powerful gems and metal combination possibilities in the game. The weapons are found in locked areas and require multiple playthroughs in order to unlock them.

Vagrant Story's Japanese-to-English localization was praised by critics. Headed by Alexander O. Smith, who would go on to localize Final Fantasy XII, the translation is flavored with Middle-English words and other stylistic details at a time before this type of effort was common in Japanese releases to other markets. This is in contrast to its Ivalice Alliance cousin Final Fantasy Tactics which, though released only three years prior to Vagrant Story, contains more of a direct translation with numerous grammatical errors.

The soundtrack was released as a two-disc set on March 8, 2000 in Japan and contains 55 tracks used in the game along with two remixes. The soundtrack was reprinted on March 24, 2006 and featured some remastering that was previously unable to be completed with the initial release. Some fans, however, have complained that the remastering affected the quality of the audio. 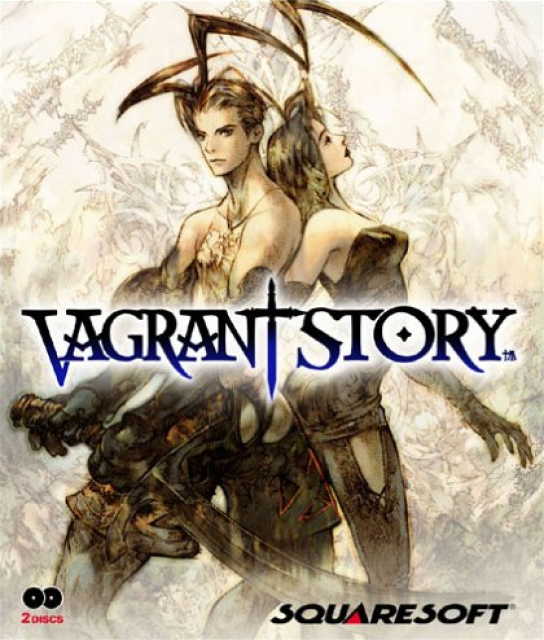