A horizontally scrolling shoot 'em up with eight levels and an underwater setting.

X-Out is a classical horizontal scrolling 2D shoot 'em up that was developed and published in 1990 by Rainbow Arts for the Amiga, Atari ST and C64. The ports for the Amstrad CPC and ZX Spectrum versions were done by Arc Developments. The game was re-released for several platforms in later years at a budget price by various companies like Kixx, Top Shots and EDOS.

It is based on the Irem coin-op games Dragon Breed and X Multiply (the sequel to R-Type) which were in 1989 two of the best shoot'em ups in the arcade halls. At the time Irem was considered to be the head of the shoot 'em up development and these two games came, apart from larger screens and superior graphics, with a far more sophisticated use of power ups. Also the game design, where the flight paths of the enemies have to be carefully analysed and huge enemies need to be destroyed piece by piece, contributed significantly to the success of these games.

With X-Out Rainbow Arts tried to convert all these Irem style hallmarks to the technically limited 8-bit and 16-bit home computers of which the Amiga version has become the qualitatively best one. Apart from the overall feel of an Irem style game X-Out has plenty of original ideas of its own, like the four different ships that can be armed in the shop with twenty six different weapons. Some features were however copied directly from the Irem games like the flying, multi-segmented serpent, with an alien on his back, taken from Dragon Breed or the rotating balls and multiplying worms which also appear in R-Type.

In the year of 2019 it comes to the first contact with extra-terrestial life. But the aliens don't come from outer space as expected they materialize in the deepest deep sea. Also, they are not friendly minded and gradually destroy the planet surface. The guys "in charge" at the United Nations come, after some squabbling, to the conclusion that the aliens must be driven out or wiped out from the bottom of the sea.

Spies were able to steal plans and material from the aliens so that all of the alien weapon systems are now available to mankind too. Up next an experienced pilot has to be found to take up the fight in the deep sea. At this point the old Grainger, an unemployed submarine veteran with an alcohol problem, joins the game. The only man with admittedly incredible abilities as a pilot and the only one who is so broke, so stupid and still so drunken to accept this job.

The game consists of 8 worlds, which are populated by crowds of enemies and the obligatory mid-level and end-level bosses. It's the player's task to free all these worlds of intruders, and with it the world. Before the start of each level one gets to the shop screen where additional weaponry and ships can be purchased with the points that had been earned in the previous levels by shooting out aliens. Since the player starts the game with a certain number of points and only one ship he has to weigh up whether he equips his available ship well or buys an additional ship before reaching for the deluxe power-ups.

The strange looking creature in the top left of the shop-screen is a deserted alien technician, who looks after the weapons and sells them to the player. The weapons and ships are bought by selecting and placing them on the grid in the top right of the shop screen. In the bottom right corner is a Melob, a creature that has a job at the trash utilization plant. Already installed parts of the ships or even the whole ships can be given to the Melob and one will get his money back. Above the Melob the acoount balance is displayed.

The weapons that can be bought in the shop are:

The game can be controlled either by joystick(all platforms) or by keyboard(Amstad CPC and ZX Spectrum). The speed of the controlled ship can also be set variably in four(only C64) or five(only Amiga and Atari ST) steps. The standard shots are triggered by pressing quickly the firebutton. By pressing the firebutton for a longer time the extra weapons that are assigned to the primary weapon systrem will be triggered. The extra weapons that are assigned to the secondary weapon system must first be activated in order to trigger them. This happens differently depending on the platform. For example on the C64 the "shift key" activates the secondary weapon system and the "spacebar" triggers it. 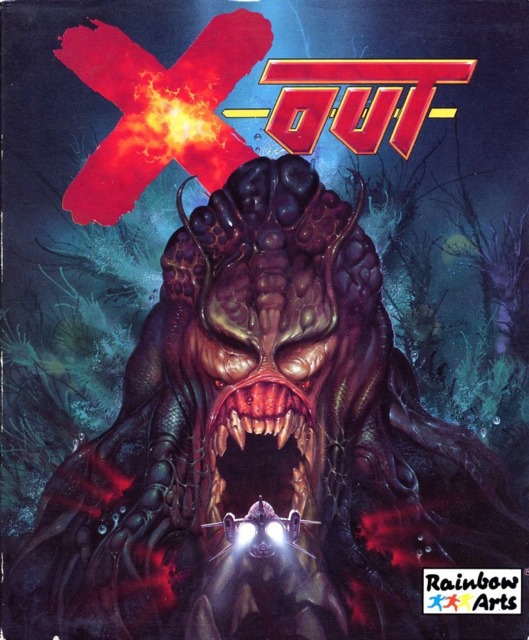