Guild Wars: Nightfall is the second Guild Wars expansion that opens up new dungeons, monsters and introduces "Heroes" which are henchmen that you customize and control.

Guild Wars: Nightfall takes place on the continent of Elona, adding a descent into the Realm of Torments towards the end of the plot. Information on core Guild Wars gameplay and character classes can be found here.

The only form of 1v1 PvP combat available in Guild Wars, Hero Battles allow players to face off with their choice of 3 NPC heroes. The goal is simply to reach 20 points before your opponent does. Points are awarded either for killing your opponents or for capturing and holding the Shrines spread around the map. Winning matches rewards players with points towards their Commander title.

(NOTE: As of the October 2009 updates, HB was retired along with Team Arenas (TA) and replaced with Codex Arena.

In addition to the six core classes, Nightfall players also have access to two entirely new ones.

The Paragon is a natural born leader who uses chants to aid his allies and defeat opponents and throwing spears to attack the enemy. Paragons can attack at half the range of Rangers and casters, allowing it to both attack the enemy and support its team with its shouts and chants while avoiding melee damage at the same time. Despite having a low energy recovery, Paragons can use a large quantity of shouts and chants due to its primary attribute. The Paragon works equally well as a support character or attacker, and has an armor bonus rivaling that of the Warrior's. Also similar to a Warrior, many of its attack skills in Spear Mastery use adrenaline, which charges as damage is done or received. All of these factors come together to make a solid class that can play a variety of roles on any team.

The Dervish is a scythe wielding class that can use earth and wind prayers in addition to its scythe to damage opponents. The Dervish also has the unique ability to take on God forms which give very effective bonuses such as not being affected by conditions or losing a hex every time it uses a skill, and it also uses its primary attribute Mysticism to cast and maintain a large amount of enchantments on itself. The Dervish's scythe has the best single hit damage in the game, often being able to hit for a quarter or even a third of the enemy's health in one hit, which lethally pairs with its ability to inflict deep wound, removing an additional 20% of their enemy's total health. The scythe can also hit all the targets in its sweep radius, making the Dervish a solid PvE class as well. Dervishes also have access to fairly formidable healing spells, so its dual role as a powerful melee attacker and a healer makes Dervishes effective and versatile units to have on your team.

In addition a new storyline and 2 new classes, Nightfall offers around 250 new skills. That is:

With the Nightfall campaign, Many armor types are unlocked. There are Several for each Profession, but they all have the same basic styles:

Many weapons are also unlocked, mostly dropped from "Bosses" and offered referred to as Green weapons due their Unique status.

Nightfall also introduced two sets of title tracks and the reward of skills as you progressed through them. The tracks are Sunspear and Lightbringer, and point are awarded for them by completing themed quests or defeating enemies in certain areas after acquiring the bounty for them.

Bounty is earned after talking to the keepers at each respawn shrine and grant rewards for killing certain enemy types - for example, a Sunspear bounty might be for killing skale, or corsairs, or bugs. Lightbringer bounties are reserved for servants of the dark, like djinn, margonites and creatures of torment.

Advancing in the ranks of either title track will unlock certain abilities and skills. The Sunspear track is limited to a handful of skills, but Lightbringer bonuses are constant, and grant you increased damage and damage-resistance to torment creatures - the Lightbringer skills are also focused in that area and cause holy damage or increased protection from margonites and Torment creatures.

The concept of skills for title tracks was carried several steps further in Guild Wars: Eye of the North, with the Deldrimor, Asuri, Human, and Norn title tracks and their corresponding class-specific rewards.

The music from Guild Wars Nightfall was composed by Jeremy Soule. 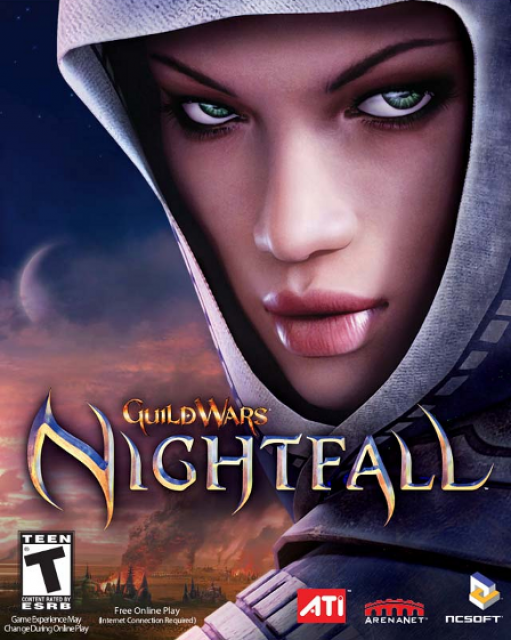