Counter-Strike gets reborn with a shiny new game engine in this 2004 remake.

Counter-Strike: Source (known as CSS), is a modern military multiplayer first-person shooter developed and published by Valve for the PC (via both Steam and retail) on November 1, 2004. The third official iteration of Counter-Strike (after Counter-Strike: Condition Zero), Counter-Strike: Source remakes the original in the then-new Source engine, updating the sounds and graphics while adding a new physics engine (mainly for use with interactive objects, such as barrels). The game also includes minor alterations to the gameplay, such as the removal of ammo purchasing, the removal of riot shields, and the increased effectiveness of flashbangs. After years of both minor and major updates (including an experimental "Dynamic Weapons Pricing" system in October 11, 2006, the Mac release on June 23, 2010, and a significant update in collaboration with Hidden Path throughout 2010), the game was later superseded by Counter-Strike: Global Offensive.

The beta version of the game was originally released to members of the Valve Cyber Café program on August 11, 2004, then released to owners of Counter-Strike: Condition Zero on August 18, 2004. A new beta version of the game (developed in collaboration with Hidden Path) was released on May 7, 2010 (for those who owned the actual game), including new features and functionality (including 144 achievements, a new domination/revenge system similar to Team Fortress 2, player statistics, and a upgraded Source engine used in Team Fortress 2, Portal, and Half-Life 2: Episode Two). After tweaking the beta, the features were rolled in to the game on June 23, 2010. Although Valve has closed the beta while rolling in the new features, the beta was later re-opened to test minor updates.

Because CSS is built on the modification friendly Source Engine there are a multitude of ways to play the game. Some of the types are available right out of the box, others are created by custom maps, plugins, addons or a combination of these. Every map indicates what game mode it was meant to be played as by its prefix. For example, de_dust2, using the "de_" prefix was made for demolition (also known as defusal) gameplay.

Valve have released a bunch of maps for Counter Strike Source that for the main part are remakes of old maps from the past games in the series. They have also released a few new maps that are made for the source version.

Since the map editor for source engine games(Hammer tools) is so easy to learn the amount of community made maps are enormous. The game also has an included downloader so if the server is running a thirdparty map you will have it automatically downloaded to your steamapps folder.

Weapons and Other equipment

In 2006, Valve issued a patch that introduced the dynamic weapons pricing system. Under this new system, weapons and items that have been frequently purchased in the last week go up in price, while those that were underused become cheaper. This change was made in reaction to the fact that Counter-Strike players are notorious in their overuse of certain weapons, the M4, AK-47 and Desert Eagle in particular. While the change was criticized by many players, the update, combined with significant buffs to some of the more rarely used weapons, did make headway into diversifying public server play however almost all of the popular public servers have disabled the feature. 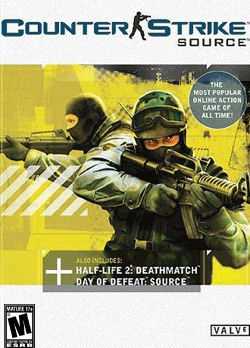