Originally created as a modification of the original Half-Life, Counter-Strike has since become its own franchise, setting new standards in online team-based shooters, and was at one point the single most-played online game in the world with a huge competitive following.

Created by Minh Le (a.k.a "Gooseman") and Jess Cliffe (a.k.a. "Cliffe"), Counter-Strike began life as a free modification for the original Half-Life. A team-based first-person shooter, the game pits players against each other in series of counter-terrorism situations, splitting people up between terrorists and counter-terrorists. Basic Counter-Strike gameplay centers on the two teams of players attempting to either wipe out the other team or complete a specific mission objective. These objectives usually involve planting a bomb, saving hostages, or assassinating a VIP. At the start of each round, players are given several seconds to purchase equipment with money gained at the start of each game and through their performance in the previous round. When a player is killed, he or she become a spectator, and must wait until the round is completed to play again.

The popularity of the Counter-Strike franchise has been nothing short of phenomenal, and for a while the original Half-Life mod was the most-played online game in the world. Subsequent releases of the series over the years (including a standalone version of the game, Condition Zero) have featured various graphical improvements but altered gameplay and physics, which have been criticisms of the most recent edition, Counter-Strike: Source. These new releases have divided the player base. As more and newer First Person Shooters have come out, the series has lost some of its lustre, and no new Counter Strike games have been announced. Nevertheless, the influence of the series in mainstream game development has been extreme and easily noticeable in other franchises such as Unreal Tournament, Call of Duty, and Battlefield.

After its creation, Counter-Strike quickly amassed a huge amount of competitive players. Leagues such as the OGL (Online Gaming League) and CAL (Cyberathlete Amateur league) began to offer different ladders and divisions for competition. As time wore on, and new versions of Counter-Strike were released, CAL turned into the most highly played and most competitive league, with the Cal Invite division (Cal-I) being the most competitive online league. As the online leagues underwent rapid growth and teams such as 3D and SK became big organizations, LAN event organizers stood up and took notice. Counter-Strike became the premier game at the WCG (World Cyber Games), the ESWC (Electronic Sports World Cup), the WEG (World e-Sports Games, and, most notably, the CPL (Cyberathlete Professional League) between 2000-2007. When the CPL began their summer and winter events in the early 2000's, it became the premier tournament for Counter-Strike teams. Almost always held in Dallas, Texas, teams traveled from across the world to take part in this event. Combined with CAL, their partner online league, these organizations formed the mainstay of tournament Counter-Strike.

The United States and Sweden are generally recognised as the biggest forces in professional Counter-Strike throughout its history, with Norway, Poland, Germany, France and Brazil all popping up with event-winning teams at times. Players such as Ksharp, HeatoN, potti, element, f0rest, fr0d, sunman, and tr1p all became iconic figures with their clans as the major teams dominated and fought for the number one spot at major tournaments year in and year out. There would be total prize purses in excess of 150,000 dollars at the biggest tournaments for Counter-Strike, with prizes for first place between 15,000 to 60,000 dollars. Teams such as 3D, SK, NiP, fnatic, MYM, coL, NoA, team9, hoorai, JMC, MiBR, and PGS were all dominant during this period, which is considered by many competitive Counter-Strike's "golden age". Another major league opened during this time, CEVO (Cyberevolution), a pay-to-play league that became as important as Cal-I at its height. Websites such as gotFrag became vastly-followed sites due to their coverage of Counter-Strike leagues, events and teams. LAN events were commonplace throughout the United States, even for amateurs to enter. CAL at one point had 5 different divisions for Counter-Strike: Open, Intermediate, Main, Premier, and Invite, all with regional brackets except for Invite. During this period Counter-Strike had a seemingly endless online following and a plethora of LAN events, with both amateurs and professionals making it the biggest, most competitive e-Sport in the world.

After many years of Counter-Strike plateauing at version 1.6, which was the tournament and league standard, Valve released Counter-Strike's sequel, Counter-Strike: Source, in October of 2004. With completely updated graphics and much shallower learning curve, it became widely played and opened up new markets for Counter-Strike.. However, as many professional players hated the new gameplay, tournaments stayed with 1.6 for a couple of years. However, as Source's popularity grew, and new leagues such the Championship Gaming Series (the first televised gaming league) opened, teams began to migrate to Source.

The dam broke in 2006-2007, when most major North American teams such as 3D, coL, and JMC all moved to Counter-Strike Source because it was seen as the future of competitive Counter-Strike. The CPL selected Source as its team-based shooter, and the community quickly fragmented. Everyone praised Counter-Strike 1.6's gameplay, which many considered the best of any first-person shooter, but its dated graphics left major video card sponsors angry, as they couldn't use 1.6 as a means to promote video card sales. As such, when Counter-Strike Source was released, these companies pushed for its support from leagues, and got it. This deeply fragmented the Counter-Strike community, as the gameplay of 1.6 was seen as better due to it being harder to learn and less random. Also, since many people had been played 1.6 for 3 or more years, they resisted this change. Further fragmentation occurred when nearly all of Europe stayed with 1.6 just as the best teams in America were switching to Source. This caused the dissolution of the compelling US-Europe rivalry that had always been present in competitive Counter-Strike. In recent years, this trend has continued, with Source being picked up by more and more North American teams and leagues, while Europe continues to play 1.6. Due to this, the competitive scene in both games is seen as "incomplete", due to the other game still being popular. As a result, other games such as World of Warcraft and Call of Duty 4 have gained popularity, and even though both 1.6 and Source are widely played, the competitive scene has since dwindled, with recently the CPL ceasing operations due to a lack of funds and interest.

Due to the success of Counter-Strike on the personal computer, Valve decided to port the popular game to the Xbox, it was released in Fall 2003. It received critical acclaim, especially for online gamers, staying the most played Xbox Live game for some months. 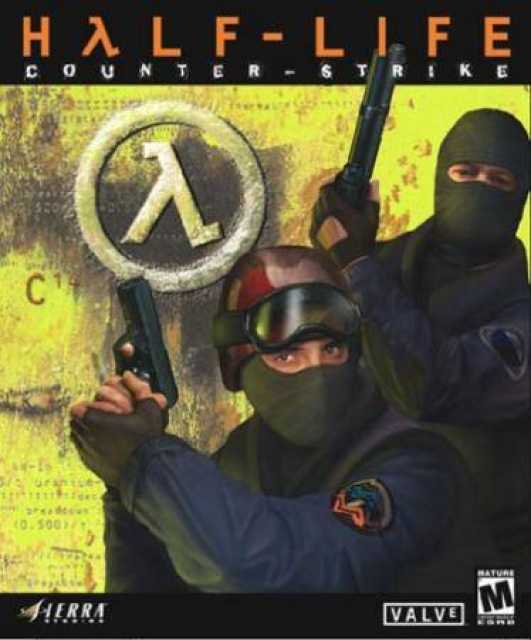