Be Bill Rizer and kick ass through a variety of intense levels by yourself or with a friend.
PlayStation 2 PlayStation Network (PS3)

Contra: Shattered Soldier (known in Japan as Shin Contra, translated to True Contra) is a 2.5D action platformer developed by KCE Tokyo and published by Konami for the PlayStation 2 on October 22, 2002.

The game once again stars series mainstay, Bill Rizer. After the Alien Wars end, Bill Rizer is imprisoned for crimes against humanity. At the start of Shattered Soldier, Bill is released from jail and tasked with saving the world yet again. This time however, he is paired up with a female cyborg named Lucia. A possessed version of his former partner, Lance Bean, is now the leading force behind the new alien invasion.

The gameplay in Shattered Soldier is nearly identical to previous versions, with the notable exception of the removal of weapon drops. Instead, the player is always in possession of 3 main weapons. Each weapon has a distinct secondary fire, allowing the player to adapt to any number of situations. The controls have also been updated with a new 'Fire Lock' feature. Holding the L1 button will lock the current firing direction, allowing for free movement while continuing to fire in a specific direction. This technique is often essential to evading fire while continuing to attack the enemy.

Each level in the game has a Hit Rate percentage displayed at the top of the screen which will tick up as enemies and parts of bosses are destroyed. A perfect 100% S Rank run of a level will require specific strategies to kill easy-to-miss enemies or destroying all parts of a boss before attacking the main weak point, providing additional challenge for expert players.

Another noticeable difference is the focus on boss battles. Many of the games stages are a series of boss battles strung together with short shooting sections. This miniboss-heavy game flow is similar to Contra: Hard Corps and some sections of Contra 3.

The player starts will all three of the available weapons, and has them at all times. The weapons consist of the following:

There are 7 levels in Contra Shattered Soldier. The first four levels can be played in any order, but all four must be beaten to open up the fifth and the game progresses linearly from there. A level select is also available, allowing any previously reached level to be played with thirty lives for fun or practice.

Level 1 - Fortress: The most traditional of the levels in the game. The player fights through an enemy fortress, fighting numerous mini bosses along the way. The end boss is a take on the boss of the first level of Contra 3: The Alien Wars.

Level 2 - Train: The level consists of three main sections; a sea-to-air ship battle, a fight against various compartments of a train, and a boss fight on the engine of a train.

Level 3 - City: A level that takes the player into the underbelly of a corrupted city, proceeds into an eerie meat processing plant, and ends in a battle with a mechanical caterpillar.

Level 4 - Seabed: This level consists of two major boss battles; one at the beginning, and one at the end. In between are two shooting segments and a miniboss.

Level 5 - Archipelago: A level set in a dense jungle. The second miniboss in the level is a rehash of the Wall boss from the first level of the original Contra. The player fights their former partner Lance Bean in this level, and eventually faces the iconic Red Falcon at the end. This level can only be unlocked by obtaining an overall "A" ranking on the the first 4 levels.

Level 6 - Sanctuary: A short level taking place on top of a plane. The player fights a transforming helicopter in three different phases at the beginning, before entering a worm hole in the sky. Once in the worm hole, the player fights the final boss over the span of 5 different forms. This level can only be accessed by obtaining an "A" ranking on level 5.

Level 7 - The Final Boss: The shortest of all of the levels. The player is chased by the boss of level 6 while riding on top of a plane. Once the boss is beaten, the game is over. 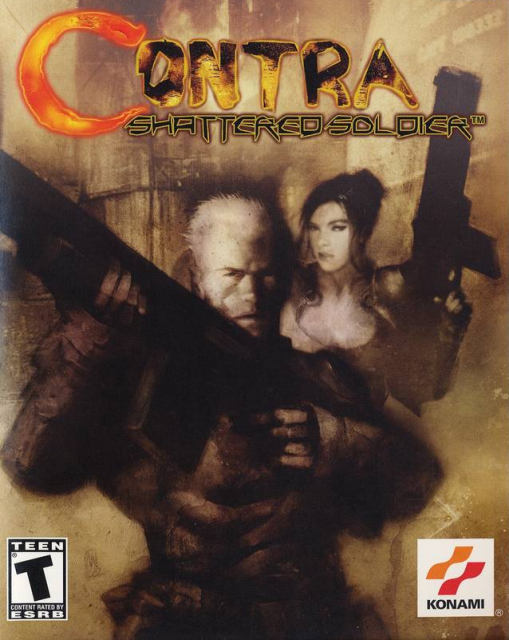