The sequel to The Operative: No One Lives Forever, A Spy in H.A.R.M.'s Way again pits super spy Cate Archer against the hopeless H.A.R.M. organization.

No One Lives Forever 2: A Spy in H.A.R.M.'s Way (NOLF 2) is a FPS set in the 1960s. It was released on September 30th, 2002 and received many accolades, including Game of the Year in certain publications. Like the original, the sequel stars the sexy Cate Archer as a U.N.I.T.Y. agent set out to once again stop the evil actions of the H.A.R.M. organization. Amidst all this chaos is the confrontation of detente between the former Soviet Union and the United States. No One Lives Forever 2: A Spy in H.A.R.M.'s Way was published by Sierra Entertainment and developed by Monolith Productions using the Lithtech 2.0 Jupiter engine.

The game starts with Cate traveling to Japan to investigate a crime convention. She completes her objective only to be stabbed by Isako the ninja. After being nursed back to health by Dr. Schenker at UNITY Headquarters in England, she is briefed by US intelligence regarding a Soviet plan to take over the island of Khios, a small but strategically important island in the the Aegean Sea. Cate's mission is to discover the plans of the Soviets, investigate how H.A.R.M. is involved, and prevent a third world war. Throughout the game, you'll find Cate in a variety of exotic locations including India, Japan, and... Akron, Ohio. You'll fight the generic cronies of the H.A.R.M. organization for the most part, but the Soviet army, ninjas, mimes, and genetically enhanced "Super Soldiers" also make an appearance to hinder Cate's progress.

Cate is able to complete most missions with pure firepower, but progressing with stealth is almost always encouraged by the game. Some missions require stealth, but they are relatively rare. In a departure from the first game, NOLF2's alarms are localized, meaning that an alert triggered in one location won't put everyone on alert for the entire mission. Sound plays a key role in being stealthy. Enemies are able to hear and find Cate if she is walking or running on hard substances. Crouching and/or walking on softer ground enables Cate to move undetected.

The game's soundtrack does a good job letting you know whether guards are aware of your presence. Slower, relaxed music means she is safe; whereas, faster, ominous music means she's been detected. Being stealthy has definite advantages. In addition to being able to deal with enemies quickly (and non-lethally, if desired), Cate is able to listen in on the conversations of her enemies. Like NOLF, NPC conversations provide some of the best entertainment in the game. Enemies discuss dating, telling time, monkeys, and the reasoning behind the H.A.R.M. salute.

Cate has some new abilities to help her through the game that were not available in NOLF. By crouching or standing still in a dark area without being seen, Cate can go into hidden mode where she is invisible to enemies around her. Cate leaves hidden mode by coming out of cover or firing a weapon. Cate can now pick up dead or unconscious bodies and move them to less conspicuous areas. Cate's rate of walking is slowed greatly, but it is useful for avoiding detection by cameras and patrols. Cate can now scan dead or unconscious bodies for items they are holding. She can perform a quick surface scan or a longer, comprehensive scan. Searching can yield guns, ammo, intelligence items, and/or junk. 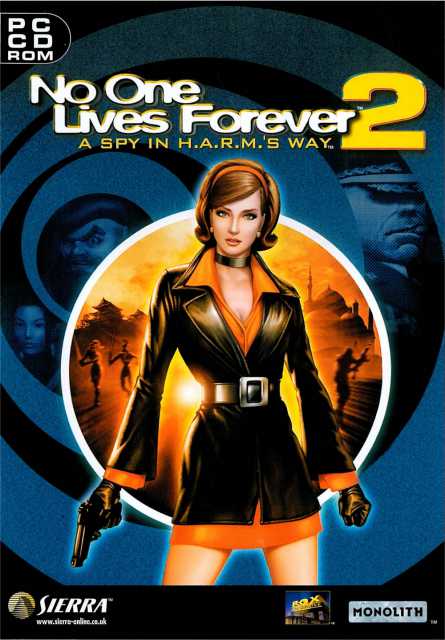