In this sequel to Gunstar Heroes, fans of the original can expect more of the same frenetic side-scrolling action and challenging boss battles.
Game Boy Advance

Gunstar Super Heroes is the sequel to the well known Genesis game Gunstar Heroes. Gunstar Super Heroes was released for the Game Boy Advance on October 6, 2005 (in Japan), October 25, 2005 (in North America), and November 4, 2005 (in Europe). The game was developed by Treasure and published by Sega. The game was very well received by critics, with an 83% average rating on Game Rankings and Metacritic. However, the game did not sell well (causing Nintendo Power to repeatedly try to urge readers to purchase the game).

Largely similar to the gameplay of the original game, Gunstar Super Heroes does introduce a few new concepts. Unlike the original game, players don't choose between Free or Fixed Shot at the beginning of the game. In addition, the throw move is removed and now replaced with melee attacks preformed through various button combinations using the A, B, and D-pad in various combinations. One of Gunstar Heroes' features was the ability to combine weapons, which is absent. Instead, Gunstar Super Heroes allows players to select up to three weapons and then charge up a powerful attack that can be unleashed through that energy.

The game takes place after the events of Gunstar Heroes, after the death of Golden Silver (the final boss of the first game). As a result of its destruction, Earth then had four moons. However, a fifth moon is revealed to be the origin of a plot to revive the evil Empire in the first game, and eventually resurrect Golden Silver. Red, Blue, and Yellow must travel from moon to moon collecting the Treasure Gems in order to stop the Empire. Based on a variety of factors, the storyline can branch off on different paths. 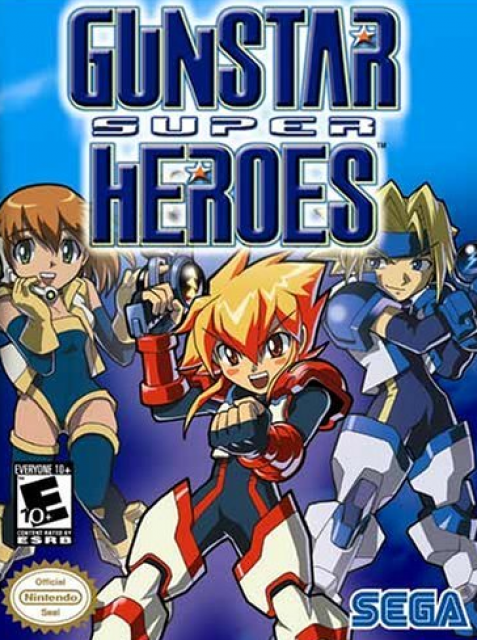