Star Ocean: Till the End of Time

Star Ocean: Till the End of Time is the fourth game in the Star Ocean series. The game takes place 400 years after the third game, Star Ocean: Blue Sphere.
PlayStation 2 PlayStation 4

Star Ocean: Till The End of Time is set in the far future, over four hundred years after the earlier games in the franchise. Earth is part of the Pangalactic Federation, a large government organization that spreads across many planets in the galaxy. Magic powers are granted to humans through the power of Symbology, which was called Heraldry in the previous games in the series. The Hero, Fayt Leingod, is on vacation with his parents and friend Sophia Esteed, when it is attacked by alien forces and he's forced to flee. He is separated from family and friends as he boards an escape pod and crashes on an underdeveloped planet. While there, he meets other offworld inhabitants, who search for him for reasons unknown, and he finds himself on an epic adventure that spans many planets and worlds.

This game is a Japanese console role playing game with quite a few large differences from other games of its genre. It's largely action based with direct control over characters' movements and actions in battle, unlike popular genre series like Final Fantasy and Dragon Quest. Both HP and MP are vital to characters' survival as well, as death can occur from lack of either of those commodities. Last of all, instead of the normal 99 or 100 levels that a  character can gain, Star Ocean characters can level up all the way to 255.

Characters can attack in quite a few different ways. They have basic attacks and skills, which come in strong and weak varieties. Weak attacks can be parried, whereas strong attacks break the opponent's guard. Skills are set in strong and weak slots, and also long and short range slots, which modify when you are able to use that skill in battle. Skills can also be set multiple tiems in multiple slots, however you have a limited amount of 'capacity points' with which to set skills. Skills can take HP and/or MP from the user, so players must be vigilant in order to avoid overusing them. There are also passive skills which can be learned through use of SP gained upon levelling up, and the passive skills range from increases maximum HP to increasing physical attack power. The game also contains a feature called 'cancel bonus', which increases the power of your attacks should you successfully link an attack to a battle skill or a battle skill to another battle skill.

Outside of battle, gameplay consists of exploration of various environments in order to find items and complete the map, which nets varying items as well, such as figurines which can increases or sometimes even decreases your running speed inside and outside of battle. Battles are not random; like many other games of its type, encounters are represented as onscreen enemies. The characters are in a typical sort of battle arena when they come into contact with the enemy, and that is where battles occur. The player can also obtain key items that affect the environment and open up new areas, such as the Disintegration Hammers.

The game also features a very in-depth synthesis system, allowing the user to combine different items to make new ones. There are multiple areas of synthesis such as Cooking, Alchemy, Engineering and Smithing, and the party members all have different strengths and weaknesses in these different areas of synthesis. The player can also recruit NPC's to perform synthesis for them, and station them in different synthesis workshops throughout the game world. These recrtuitable NPC's usually work against you on a sort of 'popularity leaderboard' which you either ascend or descend based on the quality of your synthesis, however recruiting them takes away their competition. In addition to this, any items made through synthesis can be added to shops for a price determined by the quality of te item, giving you the option of simply buying the item instead of synthesising it again. However, for it to be added to shops, you must first use the patenting system to patent it.

Fayt Leingod: A seemingly normal (aka lazy) college student from earth, he is sucked into a universe-spanning journey by what seems to be mere chance. Fayt fights in battle with a sword, and is the game's main character.

Sophia Esteed: A childhood friend of Fayt's who accompanies him on his travels. She is considered a member of the family, and refers to Fayt's parents as "aunt" and "uncle".

Although appearing brutish on the outside, Cliff is soon found to be smarter than he looks. Cliff meets Fayt not long into his travels and decides to go with him. Cliff uses his bare hands and feet in close combat.

Nel Zelpher: An agent for the kindgom of Aquios, Nel is a specialist in infiltration and spying. She is put on a mission with the rest of the party, and decides to join them.

A mysterious blue haired girl who appears to have an interest in Fayt. She is the leader of an organization called Quark, and she wields a gun in battle, and also can use minor symbology.

There are other, minor, playable characters in the game. You can choose several of them to join your party, closing off access to others. 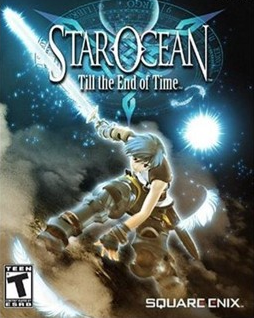