Gears of War is a third-person shooter developed by Epic Games and published by Microsoft Game Studios for the Xbox 360. Receiving tremendous critical acclaim and various awards from multiple publications, Gears of War quickly became one of the most successful titles on the Xbox 360, selling more than 4 million copies worldwide since its launch in November of 2006. The game was later released for the PC with Games for Windows LIVE support along with new game modes, multiplayer maps and other additional content.

The series has since spawned three direct sequels and one prequel, and the original Gears of War was remastered for Xbox One in 2015 (see below for details).

Gears of War features an over-the-shoulder camera which makes for a more intense in-the-action perspective. The game makes heavy use of a cover mechanic, allowing players to hide behind objects, fire blindly from safe positions, or pop out to take aimed shots at the opposition with the pull of a trigger. This cover system, while popularized by Gears of War, appeared in previous games such as Namco's kill.switch (released in 2003 on PlayStation 2 and Xbox) and Omega Force's Winback (released in 1999 on N64 and 2001 on PlayStation 2). Regardless of its origin, its use in Gears of War has further popularized the third person, over-the-shoulder mechanic. Also, the lead designer and producer of Kill.Switch, Chris Esaki, was also a lead design director for Gears of War, making it in some ways a spiritual successor to Kill Switch.

The game's lead designer, Epic's Cliff Bleszinski, has stated multiple times he was inspired to incorporate this form of camera system from Capcom's Resident Evil 4, itself a hugely successful game. He also revealed that the name Gears of War was inspired by Hideo Kojima's Metal Gear series.

The checkpoint-based campaign can be played alone or with an additional player, either locally or online. This online-enabled cooperative play remains popular two years after its original release and along with other games released in the same time frame, has helped usher in a resurgence of interest in cooperative gameplay.

The game originally featured 5 chapters, however the PC version, released after the Xbox 360 version, featured an extra chapter in which the player were being chased by a Brumak. This was originally intended to be in the Xbox 360 version, but due to time restrictions, was removed. Gears of War also has a complete multiplayer component for up to eight players; two teams of four. The multiplayer mode utilizes this same style of cover-based combat, but with weapons such as the shotgun and the ability to chainsaw enemies in half, encouraging players to get up close and personal. Multiple map packs have been released for the Xbox 360 version. These maps, along with some additional campaign sections found their way into the PC version of the game, which included mod tools.

Prior to the events of Gears of War, the humans of Planet Sera knew the illusion of peace. Humans thrived, for a time, but a lack of energy sources led to battles for 'Imulsion', a valuable fluid found deep within the planet. These battles, called the Pendulum Wars, continued for years among the various civilizations until a military body called the Coalition of Organized Governments took control of the population.

Unknown to the Coalition, an allied civilization of monstrous subterranean species were living in secret beneath the surface, plotting the ultimate destruction of mankind. Known as " The Locust Horde," the fearsome creatures revealed themselves, attacking the planet's largest cities and slaughtering billions of people. This event is known as Emergence Day.

Gears of War begins 14 years after Emergence Day. The player controls Marcus Fenix, a former COG solider who has been imprisoned for abandoning his post in a failed attempt to rescue his father, scientist Adam Fenix. Loyal friend and former squad mate Dominic Santiago discovers that Locust forces have begun an assault on the maximum security prison at Jacinto where Marcus is being held. After helping Marcus escape, the two join Kim and Carmine to form Delta Squad, a unit with the special mission of deploying a "Lightmass Bomb" to destroy the Locusts and their underground habitat. First, however, they must find a mapping device called the "resonator" so that the bomb will work properly. Delta suffers casualties along the way, with both Kim and Carmine being killed in action, but members of nearby Alpha Squad, Augustus Cole and Damon Baird, join Marcus and Dom. After facing such tasks as killing a female locust and fending off the Kryll, the group arrives at an old Immulsion extracting facility to put an end to the Locust Horde once and for all.

Venturing through the locust ridden facility and arriving underground, Marcus and Dom are separated from their new comrades. After defeating a large spider-like locust creature called a Corpser, the two squads regroup and finally deploy the resonator. Minutes later they are informed that the resonator failed to map all of the tunnels. Later though, they discover that the data necessary to deploy the bomb rests in a secret laboratory hidden within the home of Adam Fenix.

Delta team heads towards the Fenix estate and encounters much Locust resistance along the way. At one point during the long trek, the team has to take a detour through an old abandoned greenhouse, in which they encounter another Berserker. After a trying battle with the behemoth, the team exits the greenhouse and makes their way to the Fenix estate, only to find that Locust have infested the mansion. After defeating the Locust, the team find a secret passage into Adam Fenix's laboratory, where the tunnel information lies. Leaving Jack to download the info, Delta defends against a small Locust siege on the mansion. Jack finishes the download and the squad rushes towards their vehicle. They make a desperate escape, as they are chased by a gargantuan Brumak (a large, dinosaur-like form of Locust)

In the PC version of the game, a few chapters are added to the storyline, at this point, which eventually leads the Delta battle in a harsh battle against the Brumak. This upset many Xbox 360 owners that purchased the game but Epic's excuse for not releasing the chapters as downloadable content over Xbox LIVE was because of changes to the Unreal Engine that wouldn't be supported in the 360 version of the game.

Outrunning the Brumak, the team heads towards a train station. This station is running a train that the COGs can use to deploy the lightmass bomb, which will eradicate all Locust in the tunnels in that sector of the planet. Unfortunately Marcus and Dom are the only ones able to make it on the train. They battle their way from car to car, encountering many Reavers, and yet another Beserker. When they make it to the end of the train, they find the Locust General RAAM lying in wait for them. After an epic battle with their extraordinarily powerful foe, Marcus and Dom deploy the lightmass bomb and barely make it on to the COG rescue helicopter. The train crashes into a lake that connects the tunnels, and the lightmass bomb explodes, exterminating the Locust in the tunnels. The game ends as a mysterious female voice promises that the Locust will not stop until every last human is destroyed.

A typical deathmatch with rounds similar to those found in the Counter-Strike series. The players spawn as either the Locust or the COG on opposite sides of the map. It works with a last team standing mechanic; the team of the last man alive wins. Rounds can be called a draw by having players kill each other at the same time or running out the time limit. The team that gets to the host's preset round win count wins.

Execution is similar to Warzone in that combat is identical. The difference is that a player has to be near their target to kill them. The simplest way to do this is by chainsawing or head-stomping an enemy. Unlike the other modes, self-revival is possible, though after being downed three times, a player will die and be out for the round.

In this mode each team has a player controlled leader. Those players will be made into "Colonel Hoffman" for the COG team and General RAAM for the Locust. The goal is to kill the leader of the opposite team for the round-win. The player who killed the leader of the opposing team will be the leader for his team the next round while the highest scoring member of the losing team become the leader for the next round. Also the leader of the team is the only one who can pick up the more dangerous weapons like the Longshot Sniper Rifle and the rocket launcher. After a leader equips a larger weapon he can drop it for the usage of the other members of his team.

This mode was added with a patch. It has a King of the Hill mechanic where the teams must capture points around the map, within the game unlimited respawns apply unlike the other game modes, making it a more fast paced game type. Only one location will appear at a time. Once your team has captured the location with no other enemies in it, the capturing team will gain points. If a member of the opposite team tries to capture it your team will no longer get points until that enemy is removed. 60 points are available in each location and after those are taken, the location will reset. Once the host's limit is reached the round is over.

Act 3: Belly of the Beast

The Gears of War soundtrack was released on July 31, 2007 and was composed by Kevin Riepl who has previously worked on Unreal Tournament 2003 and Unreal Championship.

In June of 2008, Epic later re-released Gears of War for the Xbox 360 game at a suggested retail price of $29.99. This version contains two discs: The first one is identical to the original release, while the second disc contains:

At its 2015 E3 Press conference, Microsoft announced Gears of War: Ultimate Edition for Xbox One. The graphics have been completely redone, as has the motion capture; all of the cutscenes were also reshot and rendered, with only the dialogue staying the same.

The remaster will run 1080p at 60 frames per second, though only for the multiplayer; the story is locked at 30 frames per second. It will also include 90 minutes of content previously exclusive to the 2007 PC release of the original game. Other new features include:

Gears of War: Ultimate Edition was released on August 25th, 2015.

The game has several achievements that reference other films and various pieces of pop culture in their titles,

Gears of War requires 6.3GB of space to install on an Xbox 360 HDD. 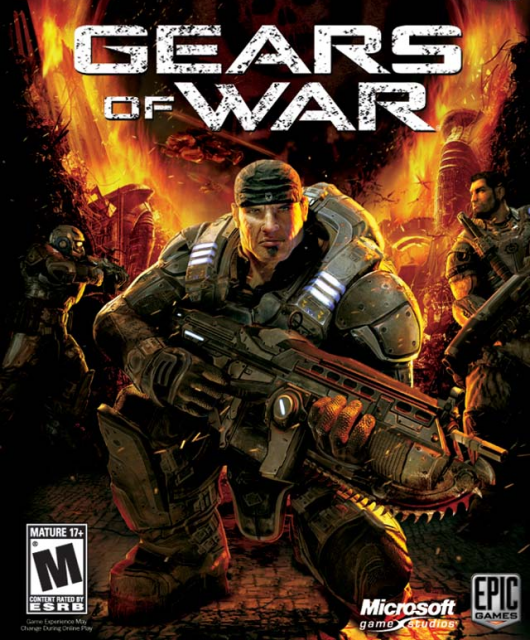