Dynasty Warriors 3 builds on the foundation of Dynasty Warriors 2's hack-n-slash mechanics, with the player's chosen officer squaring off against thousands of foes.
PlayStation 2

Gameplay begins with the player selecting a mode of play, followed by a character to play as. The player can then customize the character by selecting a weapon and special stat boosting items to equip. The player can also review a map of detailing starting placements of officers, the battle win/loss conditions, and a brief overview of the story behind the battle.

Battles take place on large open maps; the player has freedom to roam the map at will, though certain regions may be blocked until prerequisite conditions are met. As a battle begins, enemy and ally NPC units will advance to do battle with one another. The effectiveness of both sides is guides by a morale system. Enemy and ally morale fluctuates as objectives are either met or failed, officers are defeated, and gates (soldier spawn points) are captured or lost. To achieve victory, the player must complete the stage's primary objective. Defeat comes if the player is defeated or is prevented from completing the primary objective, the allied commander is defeated, the allied main camp is captured, or time expires.

The basic combat controls features a standard attack button, a heavy attack, or "charge" attack button, and a musou attack button, which is used for character-specific special attacks. On a PS2 controller, these controls are mapped to square, triangle, and circle respectively. The player may also enter a first-person aiming mode by holding a shoulder button and fire arrows from a distance, though the player's stock of arrows is limited.

The combo system, sometimes called the "charge" system, allows for the simple stringing of basic attacks together to form combos, and then finishing with with a charge attack. the effects of the charge attack vary with the length of the standard combo string that preceded it. The maximum length of a combo the player character can perform is determined by the weapon equipped.

The player can ride a horse by running up to one that does not currently have a rider and climbing on with the jump button. While on a horse, the player can cover more ground in a quicker amount of time, and can also attack enemies from the saddle.

Scattered about stages are crates and pots that contain health refilling items and temporary power-ups. The player can collect these items by smashing the container. Power-ups include an axe that doubles attack strength for thirty seconds, armor that boosts defense for thirty seconds, and an imperial seal, which grants unlimited musou energy for ten seconds.

As each stage is completed, the player character will be award points that work like experience points, allowing the character to grow in rank as certain point milestones are met. As characters rank up their maximum health and musou gauge limits are increased. The player can also upgrade the characters' attack by collecting swords from fallen enemy officers and shield from defeated enemy gate captains. Character progression carries between Musou and Free Modes.

The following is a list of game modes found in Dynasty Warriors 3.

The story mode of Dynasty Warriors 3. In this mode, the player selects a character and then progresses through a series of stages linked by story events and cutscenes. As more characters' Musou Mode storylines are completed, the more characters become unlocked.

A free battle mode for one or two players. In this mode, the player can select to play any unlocked stage with any unlocked character.

A mode in which the player is challenged to defeat as many soldiers and officers as possible before being defeated.

In this mode, the objective is to knock as many soldiers off a raised bridge platform as possible. The mode ends with the player is either defeated or knocked off the bridge.

In this mode, the player is challenged to defeat as many enemies as possible within a set time.

The 41 characters in Dynasty Warriors 3 are divided into four groups. Three of these groups represent the Three Kingdoms of Shu, Wei, and Wu, and the last are Other, unaffiliated characters. Upon starting the game, nine characters are available to be used. The others must be unlocked through gameplay. 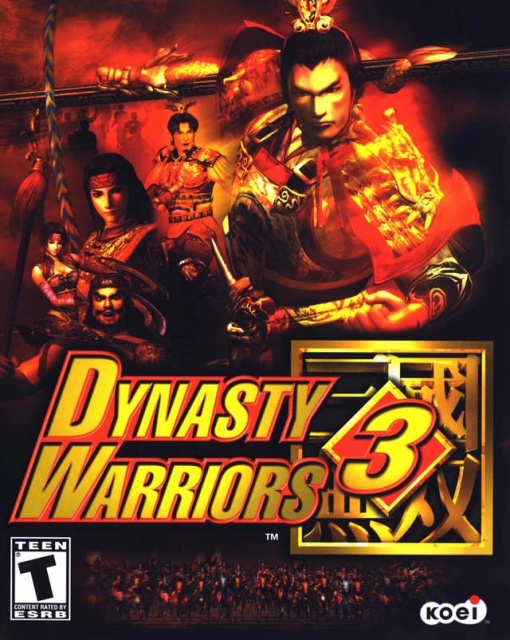