Sphinx and the Cursed Mummy

Starring the demi-god Sphinx, and the undead corpse of Tutankhamen, this action-adventure game is filled with Ancient Egyptian mythology.

Sphinx and the Cursed Mummy is a 3rd-person action-adventure game developed by Eurocom, and released in 2003 on the Xbox, Gamecube, and Playstation 2.

The game revolves around two main characters, both requiring unique styles of gameplay. The primary character, Sphinx, is a demi-god with a mostly human appearance. He carries a sword, and is involved in mostly action-oriented gameplay. The other character, "The mummy", was previously a prince known as Tutankhamen, before put under a curse that had him mummified. The downside of this is that he moves slowly, and is unable to attack, but since he is undead he can solve various puzzles by using his indestructible body to his advantage. Examples: setting fire to himself, crushing himself, and cutting himself into three separate mummies. While this may seem a little masochistic, it's all handled in a very light manner, and the mummy is really an amusing character, in contrast to the serious Sphinx. 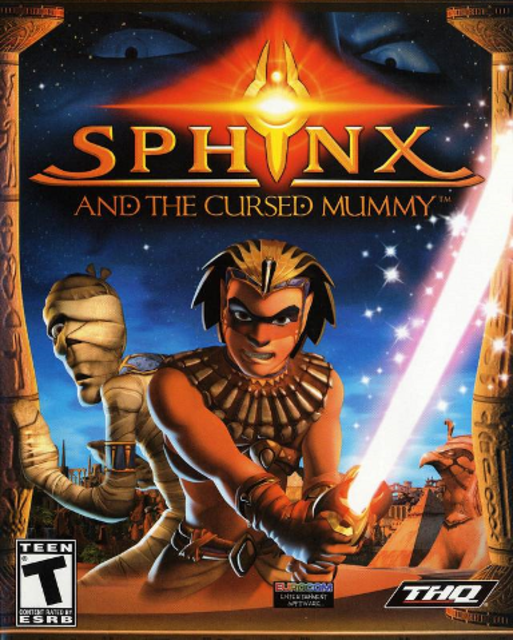