A sci-fi third-person shooter from Rare that puts players on a quest to rid the universe of the evil tyrant Mizar and his massive insectoid army.

Jet Force Gemini is a third-person shooter developed by Rare for the Nintendo 64. While primarily a shooter, the game also contains many platforming elements. The platforming allows for a shift away from linear level progression towards one that encouraged exploration in a manner similar to other Rare produced games, such as Banjo Kazooie. Like Banjo Kazooie, and many platformers of the time, the game contains a huge number of collectible items. Reviewers considered this one of the game's weak points. In addition to an extensive single player campaign, Jet Force Gemini also offered split-screen mulitplayer modes.

The game starts with Gemini squadron (Juno, Vela and their trusty dog Lupus) in orbit of the planet Goldwood when they witness an attack upon the the planets native population, a bear like race called tribals. The attackers are the drones of space tyrant Mizar, who sees Goldwood as a valuable resource and the tribals as slaves and easily dispatched if need be. Frustrated at the inaction of their government who believe that Mizar is not a threat the Gemini squadron head towards the planet, splitting off into separate paths. Upon landing Juno is greeted by King Jeff, the leader of the tribals who shows him that Mizar is systematically invading planets and seems to have almost an infinite army. It soon becomes apparent that Mizar wants more than Goldwood's surrounding planets but wants to control the entire universe including the destruction of Earth. With the federation ignoring the threat only the Gemini squadron are left to save Earth.

Unlike many shooters, Jet Force Gemini featured a structure similar to 3D platformers of the time. Levels were non-linear, with a focus on exploration and the collection of items to aid the player or allow for further progression. Many levels feature situations where players can take different paths to reach objectives. Later in the game, players are able to visit each planet with any of the available characters. Because the three playable characters posses different abilities, each can access areas inaccessible to the other two. The game's main collectible item is the Tribal, a small Ewok-like creature. Tribals are hidden throughout the levels, and to fully complete the game and defeat Mizar a player must collect them all. This task is impossible during a player's first run through the game, as several Tribals in the earlier levels are unreachable without items gathered later in the game. Additionally, Tribals can be killed either by the the player or enemies. If a specific Tribal is killed, it cannot be collected, and the player will have to replay the level to save it.

The single player campaign could be played cooperatively once the player rescues Floyd. From that point on another player can control Floyd's gun turrets but not his movements.

The standard deathmatch option of Jet Force Gemini. While the matches could not be customised as heavily as game like Goldeneye, it did allow a few weapon choices and game scoring modes based on time, number of kills or number of lives.

This mode is essentially an on rails shooter where the players controlled a cross hair and were taken through a set path on a course where they had to shoot at targets of drones and avoid targets of tribals.

A simple arcade type racing game that is unlocked as a multiplayer option once the mini-game has been completed in the single player campaign.

Like another Rare game for the Nintendo 64, Conker's Bad Fur Day, Jet Force Gemini's character designs underwent significant changes during development. When the game was first shown at E3 in 1999, the protagonist characters, Juno and Vela were portrayed as children with large chibi-style heads. This elicited a negative response from show attendees, and the characters were changed to their final more "adult" versions.

Jet Force Gemini a fairly positive response from reviewers, with the most common complaints focusing on the game's high difficulty and the game's requirement that players save every tribal.

Jet Force Gemini is one of the 30 games included in Rare Replay for the Xbox One. 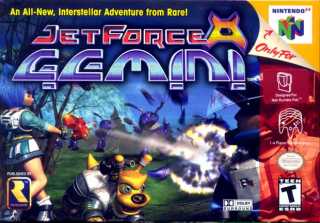