Battlefield 1942, the first in the acclaimed Battlefield franchise, pits Axis versus Allies in large-scale multiplayer battles.

Battlefield 1942 has a single player mode. However, this is simply a means playing multiplayer against bots and is meant to be more of an introduction to the game, allowing the players to familiarize themselves with the maps and game play.

Multiplayer is the heart of the Battlefield games. In Battlefield 1942, up to 64 players can play in the same match. This combined with the large maps has earned the battlefield franchise a reputation for being more strategic than other online shooters.

All maps in the game are based on actual battles that took place during World War II. These include battles in Africa , Europe, and the Pacific.

As well as the regular Deathmatch and Team Deathmatch, Battlefield 1942 also features the Conquest mode. In Conquest, both teams start with an equal amount of tickets (the exact amount varies with map and server). Each respawn costs one ticket, and the objective is to reduce the other teams tickets to zero, which can be done by killing enemies. However, on each maps there are flags placed at key locations. Controlling these flags doesn't only activate spawn points. If one of the teams control a majority of the flags on a map, the enemy's tickets will start to decrease. As more flags are controlled, the decrease is faster. If one team controls all flags and none of the players on the enemy team are alive (meaning that they are unable to capture a respawn point), the tickets decrease to zero instantly.

Two expansions were released for Battlefield 1942: The Road to Rome and Secret Weapons of WWII. Road to Rome introduced new maps based battles that took place in Italy during World War II as well as some new weapons and vehicles. Two new armies were also introduced; Italy (for the axis) and the Free France Forces (for the allies).

Secret Weapons of WWIII took a less conventional route and added weapons and equipment based on research that was made during World War II. Among these are jetpacks, jetplanes and guided missiles. The expansion also added an objective based game mode.

Desert Combat is an award winning FPS mod for Battlefield 1942, created by Frank Delise, Brian Holinka and Tim Brophy. DC is set in Iraq during the first Gulf War. It acquired popularity since the 2003 invasion of Iraq by Coalition forces. The mod saw large success and enjoyed a large following especially in the competitive gaming scene, the Cyber Amateur League ran many seasons of the game. Its creator Trauma Studios was acquired by DICE in September 2004, where they went on to help create Battlefield 2.

Forgotten Hope is a modification for Battlefield 1942 that concentrates on adding both a more realistic and more enjoyable playing experience than the original BF1942 and includes many new specially designed custom maps to play in. The mod includes over 250 new pieces of authentic equipment (more than any other Second World War FPS), with tanks such as the mighty Russian IS-2 heavy tank and the diminutive Japanese Ha-Go light tank, aircraft from the rugged American P47 Thunderbolt to the antiquated British Fairey Swordfish biplane, warships such as the British Ark Royal aircraft carrier and the German Battleship Tirpitz and weapons including the powerful German Panzerfausts and the fearsome Russian PPSh-41 submachine gun.

In North America, Battlefield: 1942 had a very lengthy competitive run through several leagues and ladders, most notably the Teamwarfare League(TWL) and the now defunct Cyberathlete Amateur League (CAL). Team d.emise won CAL's inaugural (Season 1) Battlefield:1942 Championship by defeating The Final Stand on the Wake Island map during the Spring of 2003. The format featured both teams of 12 players going head to head, best 2 out of 3 rounds. TWL had very popular ladders and leagues as well, with 5 versus 5, Capture the Flag, 8 versus 8 and 12 versus 12 formats.

To celebrate the Battlefield's 10 year anniversary, EA announced that Battlefield 1942 will be free of charge until March 1, 2013. An Origin account is required. 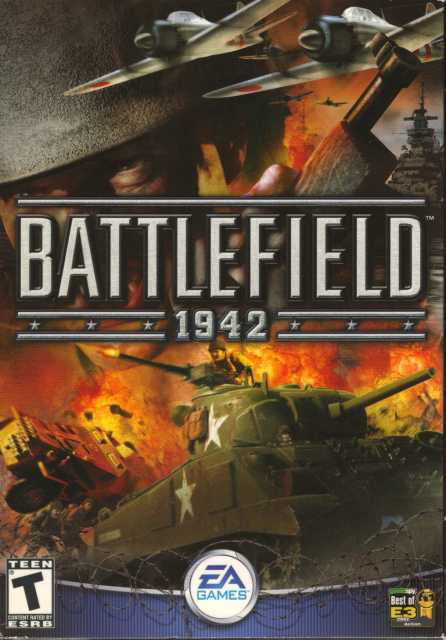