This game takes the four-man squad dynamic of the Conflict: Desert Storm games and transplants it into the setting of the Vietnam war.
PlayStation 2

Set during the Tet Offensive of 1968 Conflict: Vietnam follows a four-man squad of US 101st Airborne soldiers as they carry out missions while attempting to reunite with their unit. The gameplay is very similar in many ways to the previous titles in the series (Desert Storm and Desert Storm II) although the mostly jungle-based missions give a different twist to the scenarios encountered and the time period means less hi-tech equipment is available to the player (no laser designators or night-vision goggles to be found here). Rather the player will often be scavenging for weapons and equipment as encounters with friendly forces are few and far between, a change from the nature of the previous titles where the special forces team the player commanded was usually resupplied between missions. The missions and their setting vary, taking in jungles, swamps, rivers and cities, as well as a couple of on-rails sections on a PT boat and a Huey. The themes of the levels will be familiar to anyone who has studied the Vietnam War, or even seen a few of the relevant films; a Russian Roulette scene a la Deer Hunter is used to introduce one level, while tunnel networks, booby traps and racial tensions in the squad itself (between the African-American Junior and redneck Alabaman Hoss) tick all the relevant boxes for Vietnam-era themes and commentary.

Although the characters themselves are new their roles will be familiar to anyone who has played the other games in the series. Frank "Ragman" Wier takes the place of Bradley as squad leader and all-round useful guy, usually packing an assault rifle or submachine gun, as well as a shotgun as his primary armaments. Bruce "Junior" Lesh  fills in for Foley as the sniper/marksman and as such is best utilized with some kind of sniper rifle. Will "Hoss" Schafer  covers for Connors' absence, although unlike his Gulf War counterpart is unable to carry both a light machine gun (his primary weapon) and anti-tank rockets at the same time. Finally Harold "Doc"/"Cherry" Kahler takes the role of Jones, although as a dedicated medic only, whereas Jones would be either a medic or a combat engineer first and foremost, depending on whether the player selected to play as American or British in the first two Conflicts. Doc usually uses an assault rifle or SMG in combat.

The skill upgrades for characters have been adjusted and expanded, allowing the player to earn points for each character's performance in a mission which are then spent upgrading numerous skills, allowing the player to tailor different members for specific combat specialties. All four characters are capable of everything but can have any of their abilities upgraded, meaning they are not necessarily tied to the abilities the game designates them at the start. However, since they start with a slight skill increase for their specific role it is usually advantageous to roll with the game's allocation of squad roles for each member.

The squad commands are issued in much the same way as the previous games, allowing one squad member to be directly controlled at any one time but enabling instant switches to any of the others. The characters not under the player's control can be ordered to move to specific locations in the player's line of sight, fall in on the player or hold their position. They can also be told to engage specific targets (although it usually easier to do it yourself) and told whether to fire at will or not. When on for a specific squad member, he will fire at any enemies he sees, whereas when off he will only return fire if engaged by the enemy.

The game is set over a period of a few days immediately before and during the Tet Offensive of 1968 when North Vietnamese Army troops and Viet Cong guerillas launched a nationwide offensive over the whole of South Vietnam. The opening cutscene is narrated by Doc, a nineteen-year old med student who has just arrived in country 'wide-eyed and scared shitless' and been assigned to a squad in the 101st, based at their base camp, referred to as 'Ghost Town'. This base acts as the first level, allowing the player to get used to the movement, weapons use and squad commands which will be integral to the gameplay out there in the jungle.

The first combat mission takes the form of a routine jungle patrol through some jungle, a village and finally to a temple for evac by helicopter. Things immediately get more hectic however as the Offensive begins the next night, necessitating the four guys to fight through their own camp, finally making a last stand at the centre while marking targets with smoke for an orbiting AH-1 Cobra gunship to destroy. After this, the squad deploys in Hueys to carry out a nighttime patrol but both slicks are shot down, the second only moments after disembarking the squad, leaving them to fend for themselves while trying to find the second Huey and then link up with the Lieutenant of the squad they were originally meant to be fighting with.

After this the only route for the squad, with no radio and no backup, is to fight their way back to friendly territory, taking in a bunker complex then nearly getting fried by their own strike jets dropping napalm while trying to get to a river, whereupon they meet the Chief, the commander and sole remaining crew member of a PT boat returning from dropping off Green Berets upriver. After defending the boat as it passes through VC-populated territory the squad finds that Chief has been shot dead in the chaos, moments before being surrounded by Montagnards, tribal Vietnamese highlanders whom even the VC fear encountering but who (as in the actual conflict) formed an alliance of sorts with US troops. Their chief, it turns out, has in his possession a radio with which the squad could call a helo for extraction, but in exchange he requires the squad to fight through an old temple and recover a sacred statue which the VC stole.

However, the extraction only serves to remove the four guys from the proverbial frying pan as they land up defending a small base against huge waves of NVA infantry, the end result of which is a (somewhat confusing) capture of the four guys and the commanding officer of the base. The four must then escape a POW camp and travel along the road a fair distance, destroying enemy forces en route, after which they encounter a small contingent of Australian SAS troops trying to destroy some tunnels and caves being used by the NVA to store armaments and ammunition. After assisting the SAS the squad hitch a lift to Hue, the old imperial capital of Vietnam where heavy fighting is taking place. After neutralizing some enemy tanks and helping some US Marines fend off a large attack the squad get across the city to where a helicopter can take them over the river to the 101st's current location.

This however leads to the final mission, as the chopper is downed and both pilots killed, once again leaving Ragman, Junior, Hoss and Doc on their own, and now needing to fight through a huge citadel, eliminating all the enemy forces they find, at the end of which the game is complete.

The closing cutscene is once more narrated by Doc, explaining what happened to each of them after the war. Hoss returned to Vietnam for two more tours. Junior went home, eventually joining the Black Panthers and being killed in a shootout with FBI agents. Doc himself completed his medical studies, where his knowledge of treating gunshot wounds came in handy in the inner city emergency rooms during escalating urban violence. Finally, Ragman retired to the wilderness to live in seclusion with his dog Ho Chi Minh. Doc ends his narration with the statement that a piece of each of them will always live in Vietnam.
Shellshock: Nam '67 Shellshock 2: Blood Trails Men of Valor Tunnel Rats Vietcong: Purple Haze Platoon Seal Team Platoon 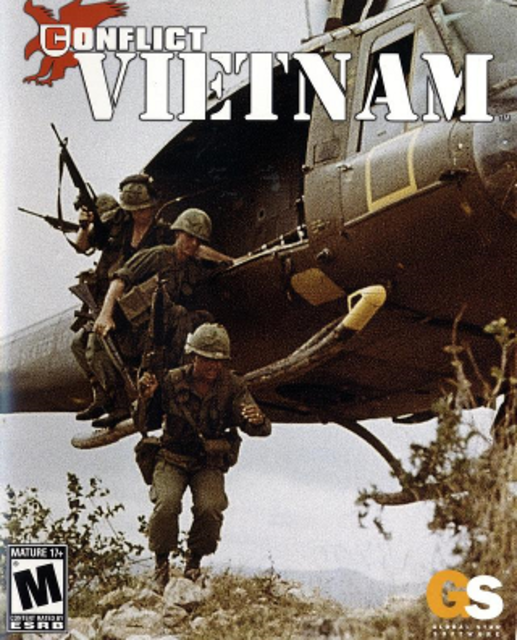