The second and last game set in the alternate-1930's world of Crimson Skies, High Road to Revenge brings a new dogfighting adventure of the Fortune Hunters air pirates to the Xbox.

Crimson Skies: High Road to Revenge is a dieselpunk historical-fantasy aircraft combat game developed by FASA and published by Microsoft for the Xbox on October 21, 2003. It was later included in some editions of the "Xbox Live Starter Kit".

The sequel to the original PC game Crimson Skies, High Road to Revenge puts players back in the role of sky pirate Nathan Zachary as he sets out (with the rest of the "Fortune Hunters") in the alternate 1930s Americas to seek revenge against the mysterious military force that murdered one of his closest allies.

Along with a new gameplay engine (simplifying some flight aspects for consoles while adding new mechanics, such as enemies dropping power-ups and mountable anti-aircraft turrets), the game features enhanced multiplayer with split-screen, LAN, and online Xbox Live support. Support for Xbox Live multiplayer (as well as free downloadable content) was later discontinued on April 15, 2010.

The game is an arcade-style flight game. Landing and taking off is automated, and health and shields can be regenerated by hitting crates. There are over ten planes to choose from, each with different specifications and weapons. Most of these can be upgraded once by spending credits in the game. Primary weapons have infinite ammunition, while secondary weapons like rockets and electricity waves can only be used a finite number of times. There is also a Special Meter that experienced players can fill by doing aerial tricks like barrel rolls. Players can use other weapons, like anti-air warfare systems and turrets. Downloadable content was introduced to the game, adding new planes, multiplayer maps and multiplayer modes.

The singleplayer lets the player control Nathan Zachary as he plays out the plot. There are twenty levels and four difficulty settings in the singleplayer game. Each mission is objective-based. The missions are divided over four regions. The player can explore the new region, make money doing nonessential tasks, and plan which missions to embark on first.

Multiplayer is available over split-screen, with up to four people sharing one screen. Sixteen players can play together with System Link or Xbox Live, where the latter can be played by two people in split-screen on the same account. Players are ranked on Xbox Live using a dedicated system, where winning against higher ranked enemies grants more points. The multiplayer is split between a series of modes;

Arixo is the nation that used to be Arizona and New Mexico. Run by the Arixo Indians, it's in a tight spot politically and literally, sandwiched between the Republic of Texas and the nation of Utah. Arixo is a favorite for pirate gangs because there are lots of places to hide out. You can enjoy some peace and quiet - while planning your next move. Rumor is there's more in the ground than worms.

Chicago, in the Industrial States of America, is a hopping town, packed with skyscrapers, planes, and elevated trains. It's more hazardous to fly through the streets of Chicago than it is to weave through the canyons of Arixo.

Not much is known about this place, but we have learned that it's another treacherous stretch of land. Large tunnels were part of some lost city, and they're big enough to fly through - even get lost in. 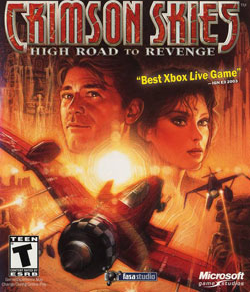