Built on an advanced version of the Ken Silverman's Build engine, Xatrix Entertainment tells the story of Leonard and Cletus, a pair of hillbillies whose beloved pig was kidnapped by alien invaders.

Redneck Rampage is a comedic sci-fi first-person shooter developed by Xatrix Entertainment and published by Interplay. It directly lampoons common hillbilly stereotypes in every aspect ranging from the core gameplay to the music to the included readme file, which is named, "helpyall.txt". The game puts the player in the shoes of Leonard, an unintelligent Southerner who, along with his equally stupid brother Cletus, seeks to rescue their favorite pig from the aliens who happen to have invaded Alabama.

Basic melee weapon, a full year before Half-Life!. Each non-boss level is ended by having Leonard smack Cletus in the head with the crowbar.

Highly accurate .454 pistol that works well for sniping enemies at long ranges, though it lacks power.

Fully automatic assault rifle that climbs as it fires.

Explosive projectile weapon useful for blowing open marked walls and for taking out a room of enemies at a time. Also capable of blowing up the player if they hold it too long.

Fires saw blades at the enemy.

Picked up from the Alien Hulk Guards, the Alien Arm Gun is a highly damaging plasma-based weapon. The gun is still attached to the severed Alien Hulk Guard's arm, and Leonard fires it by yanking an exposed tendon.

Stationary explosive barrel that can be set by the player and then blown up from a distance using another weapon. Basically useless.

"Double-barrelled" machine gun brassiere worn by the Alien Vixens. Useful against the aliens if you don't mind looking stupid(er).

The bowling ball is first found in E1L4 and can be carried throughout the rest of the episode. It can be used to bowl at the bowling alley in which it's found and it must be picked back up after each use. It can be rolled at the enemy, but it does very, very low damage and must be retrieved after each throw, making it useless as a weapon.

Weak enemy that flies around and does minimal damage.

Passive animal that only attacks in self defence.

Passive animal that will attack in self defence, but does minimal damage.

Aggressive enemy that takes multiple scattergun shots to bring down.

Weak enemies made of human feces that will try to swarm the player and cause damage by hurling pieces of their smelly bodies at the player. Some are known to self-destruct in close proximity to Leonard.

The most common enemy type throughout a bulk of the game, the Skinny Old Coot is a clone of a man from Hickston, Arizona, Leonard's home town. A fairly weak enemy that attacks the player with a revolver. Easily dispatched with a shotgun blast.

Another hillbilly clone, Billy Ray is the second most common enemy throughout the game. An obese gentleman in overalls, Billy Ray is armed with a shotgun, and takes way more damage than the Old Coot.

Rarely seen throughout the game, clones of Sheriff Hobbes make their first appearance in E2L1 and attack the player with dual six shooters. After unloading both guns, he has to pause to reload (something he loudly announces) at which point he's vulnerable to attacks.

Beautiful alien women who seek to dominate the human race. There are three levels of Alien Vixens separated by colour: Green (basic), Brown (Level 2), and Blue (Level 3). The level two Vixen has 50% more health than the basic Vixen and the level three has 100% more health than the basic Vixen. They attack the player with Teat Guns and kicks, can teleport short distances, and can withstand a substantial amount of damage (8x that of Billy Ray Jeter).

Final boss of the first episode, Assface is a colossal beast made of feces. He resides in the sewers under the smelting plant and is guarded by an army of Turd Monkeys.

The final boss of the second episode, the leader of the alien invasion. Looks similar to previous Vixens but doles out far more damage and has a lot more hit points.

Like most other games running on the Build engine, Redneck Rampage features an inventory system. Most items can be used when the player sees fit, but some--like the Vacuum Hose and Welding Goggles (which functions as scuba gear) activate automatically. Alcoholic items heal the player's life, but also get them drunk, and as they continue to drink, it becomes harder to aim, walk, and eventually even see.

The add-on was available for download at Interplay's online store, but users had to pay $1 with a credit card to ensure that the buyer was adult. The add-on was included on the CD for the Mac OS version.

Widely hailed as the dominant trait of the game, the music features a redbook audio soundtrack comprised by an eclectic mix of "psychobilly" from Mojo Nixon, the Beat Farmers, the Reverend Horton Heat, and Cement Pond. Throughout the game, promotional posters of fictitious concerts for the bands decorate the walls of the levels. 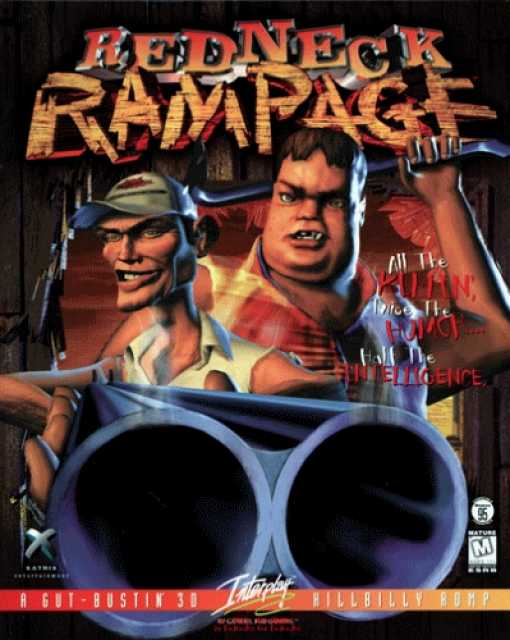