Shock Troopers is an eight directional top down shooter for the Neo Geo, starring eight commandos who must rescue a brilliant scientist and his granddaughter from a terrorist group known as the Bloody Scorpions.

Shock Troopers is a top down, eight directional shooter for the Neo Geo MVS developed by Saurus and published by SNK in 1997. The game has eight different characters, each of which have a different special weapon. After its original release, Shock Troopers was later released on the compilation SNK Arcade Classics Vol. 1 for the PlayStation 2, PSP, and Nintendo Wii. This version is nearly identical to the original Neo Geo game, although it features slightly longer loading times, as well as some removed dialogue. Additionally, in 1998 a sequel was released titled Shock Troopers: 2nd Squad. This game had little similarities in plot and style to the first game. A third game was initially planned, although nothing beyond the knowledge of its existence is known.

The plot of Shock Troopers follows a terrorist organization known as the Bloody Scorpions, who kidnap a prominent scientist. In order to force him to develop a drug known as Alpha-301 (which greatly increases the physical capabilities of any human who ingests it), the Bloody Scorpions also kidnap his granddaughter. This sets the stage for the game, and the three commandos must work to save the scientist and his granddaughter.

Shock Troopers is an eight directional shooter, whereas the player controls one of eight commandos. Each commando has a unique special weapon, as well as other properties such as movement speed and lives available. Players are able to fire in all eight directions, as well as strafing by holding down the fire button. The eight available characters are Jackal (United States), Milky (France), Loki (Norway), Southern Cross (Australia), Marie Bee (Russia), Rio (Brazil), Maru (Japan), and Big Mama (Canada).

At the start of the game, players can choose between the Lonely Wolf and Team Battle modes. In Lonely Wolf, the player can choose a single character, but have a higher total life count. In Team Battle, players can choose a team of three commandos, and then alternate between those three characters during gameplay, allowing players to take advantage of multiple special weapons throughout the game. However, this results in a lower life total for each character.

Shock Troopers takes advantage of the A, B, C, and D buttons on the Neo Geo. The A button fires, the B button performs a dodge for the respective character (varying in speed and form), the C button triggers the character's special move, and the D button switches characters in Team Battle mode. 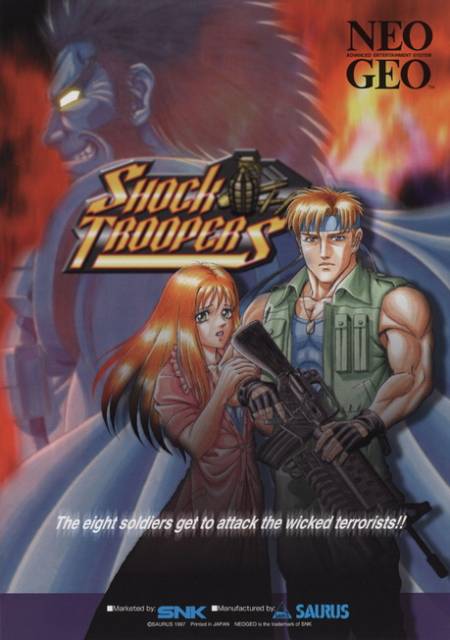