This action RPG for the PlayStation 2 is the sequel to Square's Brave Fencer Musashi. Musashi is summoned once again to save the world from the growing threat posed by Gandrake Enterprises.
PlayStation 2

In the city of Antheum, which is carried across the sky by a magical, whale-like beast called the Anthedon, young Princess Mycella goes to the Chamber of Rites pray. Unknowingly, she summons a hero who will save her world from the nefarious Gandrake Enterprises. However, her prayer is interupted by Rothschild, the Director of Administration, sending the game's hero off course. Musashi is then discovered by Master Mew, a martial arts master willing to train Musashi into the greatest hero ever.

However, while Musashi is training, President Gandrake kidnaps Princess Mycella to advance the plots of his corporation, which involves excavating the world's supply of nebulite and using Mystics to power a nebulium engine. Musashi must find and rescue the five Maidens that protect five elemental swords which can then restore power to the Anthedon. All that to stop Gandrake and his cohorts.

Musashi: An aspiring samurai, and the game's hero. He arrives in Wellspring Woods with no clue of what to do next. Thankfully, with Master Mew's help, he's quickly set on the right path to reclaim the five sacred swords.

Princess Mycella: She is kidnapped by Gandrake because he believes she possess the most magical power of all the Mystics.

Burrini: She's the Maiden of the Earth and can be found at Tunnbrod's bread shop. She's also the only person who knows the way through the maze in Wellspring Woods...because she created it.

Fontina: An extremely proud scholar, Fontina believes that the answer to the Mystics' problem with Gandrake is containted in a book. She was reluctant to summon Musashi, as well as help him find the Sword of Water.

Mirabo and Maribo: Eight-year-old twins and the Maidens of Fire. When they're not studying at the Academy, they're getting into trouble. And they both have a crush on Musashi.

Istara: She doesn't live in Antheum with the other Mystics. The Maiden of Wind prefers to spend her days in the Picodon Jungle with the Picobeans and Arachnolia. In her heydays, she was once an Arena champion, defeating monsters to entertain the other Mystics.

Master Mew: A true samurai master who teaches Musashi everything he knows.

Chief Banon: The leader of the Mystics and the Chief of Antheum. A proud but level-headed man trying to get his daughter Mycella safely back home. In order to use the game's world map, Musashi must visit Banon in his office.

One of Musashi's goals--other than rescuing the Mystics--is to find the Five Swords, legendary weapons brimming with elemental powers. For the most part, Musashi's main weapon is his katana and the Great Oar, which has the power to release a vortex of doom capable of slicing through all nearby enemies. However, to overcome some obstacles and advance the plot, he'll need to use one of the Five Swords at key moments: the Sword of Earth, the Sword of Water, the Sword of Fire, the Sword of Wind, and the Sword of Void.

Just like in Brave Fencer Musashi, the abilities of enemies can be learned through a technique called duplication. For Musashi to successfully mimic an enemy, he must first charge up his focus meter. If the "lock on" cursor glows blue, that means he can learn an ability from the enemy. You just need that enemy to attack you with a duplicatable ability, and if they you, an exclamation point will flash on the screen. The player must press the Square button before it disappears. Then a command sequence must be entered to truly acquire the ability.

The floating city of Antheum is home to an array of shops and services. Initially, the majority of shops are closed, but as Musashi continues to rescue Mystics, more and more open up.

In Brave Fencer Musashi, the main collectible were action figures which one could view in full 3D. In Musashi: Samurai Legend, Musashi can collect up to 110 Imagicards in all, gaining a collector ranking after a certain amount. There are seven series to collect from--Mystic, Wellspring, Roquefort, Terrior, Picodon, Mouna, and Special--and some Imagicards can only be acquired during a New Game+ playthrough.

In Japan, the game is known as The Legend of Musashi II: Blade Master.

The back of the game's box warns players to get ready to "rock to new music by The Surf Coasters." 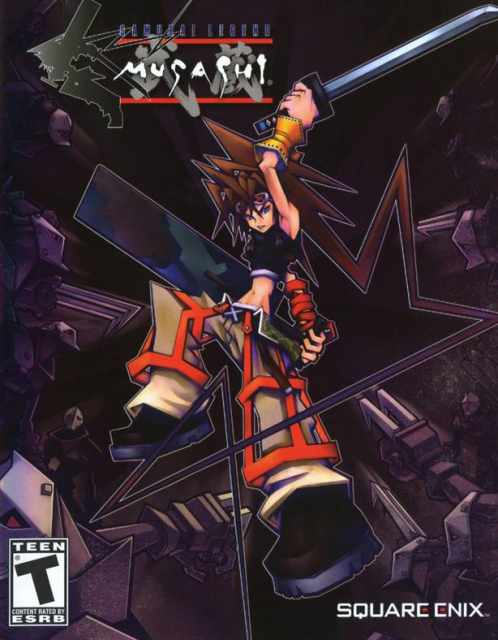