With the end of the Alien Wars comes a new squad of elite commandos bringing order to a chaotic world: the Hard Corps.

The sixth game in the Contra series (and the first for a Sega console), Hard Corps builds on its predecessors by having four unique playable characters (each with their own weaponry and attributes, similar to Contra Force), a four-weapon inventory system, and a branching story system with six unique game endings and 11 total stages. As the "Hard Corps" in a title is a pun on the word "hardcore", the game is known for its hard difficulty. The Japanese version received some changes to ease the difficulty (including a lifebar system and infinite continues).

The story takes place in far-future 2641, five years after the events of Contra III: The Alien Wars. With the Alien Wars ended, a new elite team of commandos was established to restore order (the "Unified Military Special Mobile Task Force K-X", or "Hard Corps"). At the start of the game, a major city's security system is hacked into, causing a group of unmanned robots to cause havoc. Members of the Hard Corps (including human soldiers Ray Poward and Sheena Etranzi, mutant cyborg Brad Fang, and small robot Browny) are sent to take care of the robot threat, while dealing with another threat looming in the distance.

Like previous games in the series, the European localization changes numerous elements of the game to fit with a "Probotector" theme. In this version, all four playable characters are robots (CX-1, CX-2, CX-3, and CX-4) in the "Probotector" squad and the human antagonists are replaced with humanoid aliens.

Some levels of the game were ported to the 2002 Game Boy Advance port of Contra III: The Alien Wars (replacing the top-down levels from the original game), modified to work with the Contra III gameplay. The game also received a digitally-released spiritual successor (and story prequel) in 2011 for the Xbox 360 and PlayStation 3, titled Hard Corps: Uprising. The original game will be included in the 2019 Contra Anniversary Collection compilation for the Xbox One, PlayStation 4, Nintendo Switch, and PC.

The gameplay of Contra: Hard Corps is essentially the same as Contra III's gameplay. Players traverse a side-scrolling stage, shooting enemies along the way. Players can hold multiple weapons in their inventory at once, as well as bombs. There are four spaces for weapons to be held, and one for a bomb. Each character has a unique weapon configuration.

Born and raised in city slums, Ray Poward is the leader of a bunch of delinquents who was later recruited into the Hard Corps for his unsurpassed combat skills. In Probotector, he is replaced with the robot CX-1.

He is one of the more straightforward-to-play characters from the squad, having average attributes and some of the more traditional Contra weaponry (including the Spread Gun, Crash Bomb, and Homing Missile)

A fierce warrior, Sheena Etranzi (known in the Japanese version as Sheena Etranze) was recruited into the Hard Corps for her skill in guerrila tactics. In Probotector, she is replaced with the robot CX-2.

Like Ray, Sheena is a straightforward-to-play character with average attributes. She has a different variety of weapons from Ray, including the series' traditional Laser.

The calm and collected Brad Fang is the result of the latest in genetic engineering and cybernetic technology. In Probotector, he is replaced with the robot CX-3.

Despite his large physique (making him an easier target), weaker slide, and no homing capabilities, Brad has some of the most powerful short-ranged weapons out of the entire squad (including the series' traditional Flame Thrower).

Officially known as the Model CX-1-DA300 Combat Robot, the plucky little member of the squad known as "Browny" (due to his warm personality). In Probotector, he is known as CX-4.

More suited for beginners of the game, Browny has a small physique (making him a harder target), a strong slide, and a wide versatility in weaponry. Unlike other members of the squad, he can use his jump jets to double jump and hover in the air. 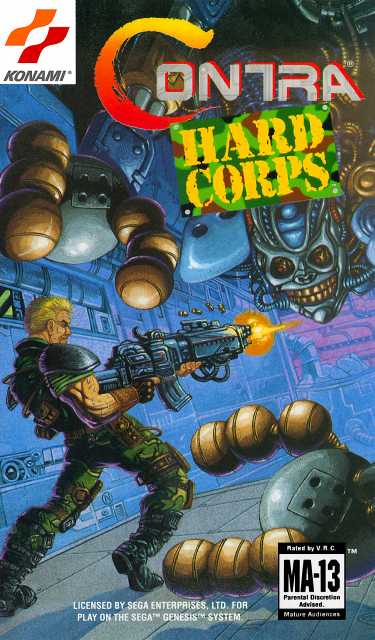