The second Castlevania entry for the Nintendo DS, extending the story of the 20th century heirs to the Vampire Killer whip (the Morris family).
Nintendo DS

Castlevania: Portrait of Ruin (known in Japan as Akumajou Dracula: Gallery of Labyrinth, the former sub-title loosely translated to "Devil's Castle Dracula") is a 2D horror-fantasy platformer-adventure game developed by KCE Tokyo and published by Konami for the Nintendo DS on December 5, 2006.

The spiritual sequel to Castlevania: Dawn of Sorrow, Portrait of Ruin is the second Castlevania title for the DS and the sixth game in the series to have the gameplay style of free-roaming backtrack-focused exploration with RPG-style attribute, inventory, and experience systems. Like its predecessor, it is one of the few games in the series to use an anime-inspired art style for its characters.

A continuation of the 1994 game Castlevania: Bloodlines, Portrait of Ruin is set in 1944 during World War II. Players control two new protagonists: Jonathan Morris (son of John Morris and heir to the Vampire killer whip) and Charlotte Aulin (descendant of Sypha Belnades and childhood friend of Jonathan), as they explore Dracula's castle to destroy Brauner, an elderly vampire and artist who uses paintings to harness the castle's power by creating alternate dimensions. Along the way, they encounter Vincent Dorin (a monk who serves as the game's shopkeeper), a mysterious spirit known as "Wind" (who plays a crucial role in the story as well as a side-quest giver), Death, and two mysterious vampire twins: Loretta and Stella.

Inspired by "Julius Mode" in Castlevania: Dawn of Sorrow, Portrait of Ruin introduces the "Partner System", which allows the player to switch between two characters on the fly while allowing them to perform a powerful dual-character attack (the "Dual Crush"). The game is also the first to introduce wireless co-operative multiplayer (albeit for the bonus "Boss Rush Mode"). Wireless multiplayer can now also be used for buying and selling items to other players.

Castlevania: Portrait of Ruin has gameplay that is most comparable to its predecessor, Dawn of Sorrow. Portrait of Ruin is a 2D side-scrolling action-adventure game. One of the biggest new features is the ability to switch between Jonathan and Charlotte, the two main characters. The two can also use a combined attack called Dual Crush. Their combined abilities are even sometimes needed to get past certain obstacles or puzzles in the game. One such puzzle involves the two jumping on two motorcycles, and then simultaneously dodging obstacles until the motorcycles crash through a wall.

In the game, players can be transported to several other areas other than Dracula's Castle through paintings that are all around the castle. These locales include a desert area and an area similar to London. The game also has a bestiary of 155 different enemies, which are spread through the several world. A lot of the enemies are from previous Castlevania games (including some of the bosses). As progress is made in the game, the characters gather new abilities, equipment, spells, and items to help them in their adventure.

After beating the game with the Best ending the player is rewarded with two separated new game play modes.The first one puts the player in control of Richter Belmont and Maria Renard. Richter is extremely fast and can take more physical damage, in exchange his magic regeneration is slower, his main weapon is the Vampire Killer, he can change to any of the classic sub weapons, he can also perform many martial arts most of them come directly form Symphony of The Night. Maria on the other hand remains fast but not nearly as Richter, she is very weak physically, to compensate this her magic regeneration is very fast, her main attack consist in launching doves to the enemy, she retains her shadow attack which also heals her, her sub weapons are the same magic animals from previous games.

The Second Mode puts the player in control of Loretta and Stella, the sisters have a unique game play as the touch screen for the DS determines how they attack. Stella is the more physical of the two, she attacks with her sword slashes, Loretta in the other hand is more magic inclined, this is ironic as her Ice Spell is the best attack and will take any enemy in seconds, unless the have a resistance against ice. The two sisters use flight as their method of movement, this drains magic and the only way to recover it is returning to the ground.

The Third playable Mode is Old Axe Armor. To obtain this mode the player most destroy 1000 Old Axe Armors during the main game. In this mode the player takes control of the enemy called Old Axe Armor, her main weapon is her axe it has little range but can be swing somewhat fast, she only has 2 sub weapons, the classic Axe and a dummy that exchanges places once is tossed. This mode is the only one where there is no companion, but Old Axe needs no one as her magic regenerates quickly and his offence and defense are not bad, she also posses some secret moves.

Portrait of Ruin is filled with references to past Castlevania games such as: 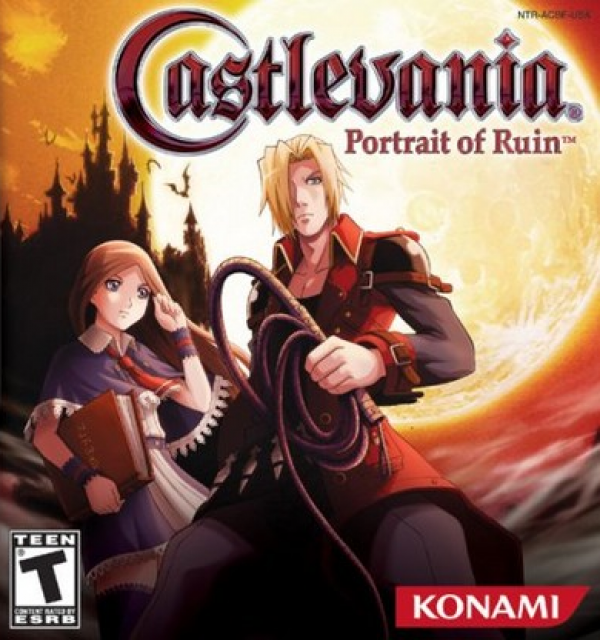