Fire Emblem: Radiant Dawn is the tenth game in the series and marks the franchises first appearance on the Nintendo Wii. It's the sequel to the Gamecube game, Fire Emblem: Path of Radiance.

Fire Emblem: Radiant Dawn is the tenth game in the Fire Emblem series, and the first released for the Wii. The game is a direct sequel to the events of Fire Emblem: Path of Radiance and features many of the previous game's characters and settings. It was originally released in Japan on February 22, 2007 with a subsequent North American release on November 11, 2007.

The story of Radiant Dawn is divided into four parts, each focused on a different conflict. In Part 1, the game is told from the perspective of the Dawn Brigade, a small group of rebels fighting to free Daein from the oppressive occupation forces of the Begnion Empire under the leadership of Micaiah, a figure mythologized across the nation as the "silver-haired maiden." Over the course of this story, it is revealed that the late Mad King Ashnard had a son, Pelleas. The Black Knight, a major antagonist that appeared in Path of Radiance, also returns as an ally of the Dawn Brigade. Part 1 ends with the Dawn Brigade successfully ousting the occupation forces, allowing Daein to regain its independence under the rulership of Pelleas.

The second part of the game returns to Crimea, the nation liberated at the end of Path of Radiance. This part of the story concerns Queen Elincia and her allies, who come under threat when a segment of the Crimean nobility attempt a military coup, believing Elincia to be too weak-willed to properly rule. The rebellion is stomped out in a final battle in which Elincia stands her ground until the Greil Mercenaries make their return and the remaining rebel forces are routed.

In the third part, the laguz nations of Gallia, Phoenicis and Kilvas choose to go to war against Begnion after a laguz messenger is murdered in Begnion. They enlist the aid of Ike and the Greil Mercenaries and march toward Begnion with the young Skrimir as their leader. A twist comes, however, when it is revealed that in signing their treaties with Daein at the end of Part 1, the Begnion senate tricked Pelleas into signing a blood pact. Begnion forces Daein to aid in the fight against the laguz under threat of enacting the pact's penalty, which would lead to the death of every Daein citizen through cursed illness.

Under the combined threat of Begnion and Daein, the laguz forces retreat back into Crimean territory. Elincia refuses to allow the fighting to carry over into her lands and makes another stand, earning the respect of the Begnion general Zelgius. When Apostle Sanaki arrives, siding with Zelgius, the war between the laguz and Begnion is halted, and the focus of the war is shifted against the rebellious Begnion senate and Daein, still under control of the blood pact.

The fighting eventually reaches its peak in a pitched battle between Daein and allied forces. As the battle rages, Mist, Micaiah, and the members of the heron clan begin acting strangely and receive telepathic messages that urge them to release the dark god trapped in Lehran's Medallion. Micaiah frees it and is possessed by the dark god, who is discovered to be Yune, the goddess of chaos. She is the counterpart to Ashera, goddess of order, who has also awakened. However, though Ashera was awakened by the unsealing of the medallion and not by the raging war, Ashera delivers her judgment. For not having learned their lesson and still engaging in conflict after conflict, Ashera uses her powers to turn almost everyone in Tellius to stone.

In the final chapters, the remaining forces that weren't petrified by Ashera's judgment head for the goddess's resting place, the Tower of Guidance. In the process, they encounter the remnants of the Begnion senate and manage to finally do away with the true instigators of the recent warring. After confronting Ashera's allies within the tower, including the Black Knight and Sephiran, who as is revealed to actually be the heron laguz Lehran, Yune and Ike lead their forces to Ashera's chamber, where they confront the goddess. Using their combined power, Yune and Ike defeat Ashera.

At the game's end, Yune restores those petrified by Ashera to normal and departs the world along with her sister. The specifics of most of the characters' fates depends on whether they survived to the end of the game and support levels shared with particular individuals. However regardless of other individual outcomes, Micaiah goes on to become the new Queen of Daein, and Ike departs on a journey for lands unknown, never to return to Tellius.

As a sequel to Path of Radiance, Radiant Dawn's gameplay is very similar to that of its predecessor. However, some key differences do exist.

The game's 45 chapters are unequally divided into four parts. Each chapter features a "leader" character, comparable to the Lord characters in previous games. For example, the leader of Part 1 is Micaiah, and Ike is the leader of most of Parts 3 and 4. However, unlike most games in the series, which focus on a select core group of Lord-type characters, Radiant Dawn features a large number of leaders. In addition to the above, characters given leader-roles in missions include Tibarn, Elincia, Lucia, Nephenee, and Geoffrey. A total of 72 playable characters are available, with 42 returning from Path of Radiance; of the previous game's characters, only Largo was left off of the playable roster in Radiant Dawn.

Because any character can form a support relationship with any other character, the support conversations themselves have been simplified and are based on templates, in which the initiating character makes a stock statement while inserting the recipient's name, and the recipient will respond with a general acknowledgment. The more colorful character dialogue that typified the support conversations in previous installments has been for the most part transferred to the Info conversations that take place between battles.

Dark magic, a magic class excluded from Path of Radiance, is made available in Radiant Dawn. The trinity of magic, or rock-paper-scissors relationship that appeared in Path of Radiance (Wind beats Thunder, Thunder beats Fire, Fire beats Wind) is collectively referred to as "Anima" magic within the higher trinity of Dark beats Anima, Anima beats Light, Light beats Dark.

With the exception of character-specific locked skills, any skill can now be removed and transferred between characters. When unequipped, the skills take up inventory space as scrolls.

The weapon forging system introduced in Path of Radiance is also present in Radiant Dawn in an improved format. Instead of limiting forge use to once between each battle, weapons can be forged as often as desired as long as the forge is accessible. Rare coins found during battle can be traded in during the forging process to further enhance the created weapon's stats.

The breadth and variety of weapons and weapon classes has also increased. Knives, which required a special skill to use in Path of Radiance, are now classified as a full weapon category with levels matching swords, axes, bows, and lances. Weapon levels can now be raised to a maximum of SS, improved over Path of Radiance's maximum of S.

Low-tier bronze weapons have also been introduced. Bronze weapons do the least amount of damage per attack and are incapable of inflicting critical damage, but they are also the least expensive and allow the most uses before breaking. Additionally, Snipers/Marksmen and Warriors/Reavers have access to crossbows and bowguns that allow the equipped unit to attack and counter-attack from melee range.

Radiant Dawn introduces the concept of elevation-based tactics to Fire Emblem gameplay. Certain stages feature elevated terrain. If two characters are engaged in battle and one is at a higher elevation than the other, the one with the higher ground will gain a boost to accuracy and damage. However, only units equipped with ranged weapons, such as bows and magic tomes, can attack an enemy on a higher or lower plain. Also, while most units can climb up ledges, cavalier units must use a ramp or stairway to reach higher elevations.

If a Gamecube memory card with a cleared Path of Radiance save is inserted, data can be transferred from the save file. Path of Radiance characters who have attained high statistics or weapon levels will receive corresponding boosts to their Radiant Dawn counterparts. Transferred A-level supports become Bond supports in Radiant Dawn, and the support conversations unlocked can be read in a support library after the game is completed. Coins collected are transferred to Ike in Part 3, where they can be used in the game's weapon forging system.

A bug present in the save transfer feature affected the first run of North American copies of Radiant Dawn. If the GameCube memory card containing Path of Radiance save data held any Easy Mode save files, attempting to transfer game data would cause the Wii to freeze. Nintendo has fixed the problem and owners of bugged copies of the game can send them in to Nintendo for a replacement. This bug is not in the European and Australian version. 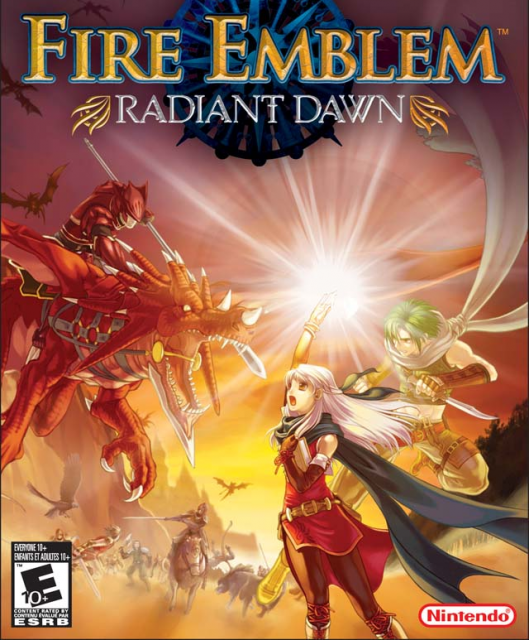