The demon lord Zeon has been set free by an unwitting thief. It is the job of Bowie, a young hero from the Kingdom of Granseal, to lead the Shining Force to victory in this Tactical RPG from Sega.

Shining Force II opens following the thief Slade as he attempts to steal two precious jewels from an ancient shrine. Unbeknown to him these jewels are actually the seal on Zeon, the Devil King, and by stealing them he has let a great evil forth upon the world.

In the kingdom of Granseal stands the Tower of the Ancients. The king of Granseal is attacked by an unleashed devil and it falls upon Sir Astral and his pupils, led by the protagonist Bowie, to investigate the attack and the strange occurrences at the Tower. Bowie, the other students of Sir Astral and the mysterious Phoenix Peter will form the basis of the Shining Force; their mission will take them across the world and pit their forces against Zeon's in an attempt to seal him away once again.

The game is focused on a team of warriors known as the Shining Force. There are several different classes in the game, but they fall under the general areas of melee combat, ranged combat, and magical combat. As they level up they will learn new abilities and more powerful versions of their current abilities, but for the most part they will be increasing in attack, defense, hit points, magic points, and other standard RPG statistical categories.

Most characters will also have the ability to be promoted (at level 20 and beyond) to some upgraded class as well; the promoted classes bring even more powerful attacks and abilities to the force. In some cases promotion may even completely change a character's focus, for instance the priest can be promoted to a master monk which is much more powerful physically but loses many of its healing powers. However, when a unit is promoted it will become level 1 in it's new class. This penalty is somewhat mitigated by waiting until later levels to promote the character, but at the same time the promotion classes are much more powerful in some cases, so the decision is a tough one for the player.

Battles in Shining Force II involve tactical missions in which 12 (or fewer) members of the player's party face off against a group of enemies. The goal is simple: either defeat all the enemies or their leader. However, players have to be careful, as they will lose if the leader, Bowie, is killed. Unlike most tactical RPGs, there is no game over. Players will be revived in the last church they have visited and given the opportunity to fight the battle again with any experience or items that were earned before being defeated.

Combat takes place in standard tactical RPG fashion. The battle occurs on a grid of squares and each character occupies a single square with the exception of some of the most powerful characters in the game. Each character will get the chance to move and perform an action on their turn. The amount of movement is dictated by the characters class and the terrain they are fighting on. After moving there are four actions:

Magic spells generally have a larger range similar to ranged attacks. Generally as the magic attack gets more powerful it also has a larger area of effect, as well as a higher cost. Spells range from elemental magic to summoning to healing magic and death magic.

Each character can carry four items at any given time. Most character use a melee weapon so effectively each character has three spots for items. Most of the time these will be healing items such as healing seeds or antidotes, but since the characters lack a communal item storage, anything that the player wishes to carry must be carried by a character in the force. In battle items are generally used on the characters holding them or someone adjacent, but items like Healing Rain will affect all friendly characters.

The last command is to stand by which ends the character's turn.

In between battles the game takes many cues from standard RPG traditions. As Bowie, the player will explore towns, talk to NPCs, buy items, and generally manage the force.

Most towns have a local church which provides several essential services to the Shining Force. At the church, the player can

A headquarters is available in one city which allows players to manage who will appear in the battle party. Players are given the ability to do this outside of the headquarters within a few battles of the party growing beyond the maximum party size. This mobile headquarters also has the ability to store additional items and access them between encounters.

While Shining Force II is a sequel to the original game the stories are not directly related, but they are in some way connected by Shining Force Gaiden: Final Conflct for the Game Gear.

There are several other differences: 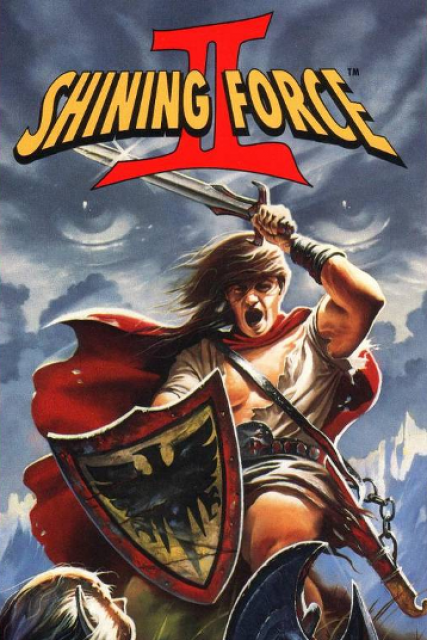