An RPG based on the popular Japanese folklore legend of Momotarou, the Peach Boy. This was the first in a series of Momotarou games by Hudson and was only released in Japan.

An RPG based on the Momotarou legend (in fact, the game's name means "Momotarou Legend" or "Peach Boy Legend"), Hudson produced it around the same time as the similarly named and themed Momotarou Dentetsu series, which involves railroads and is more board game-like in nature.

Like many early JRPGs, the game plays similarly to Enix's Dragon Quest. The battles are turn-based and the player must explore the world's dungeons for valuable quest items while interacting with NPCs in towns to receive hints on what to do as well as purchase and sell items and equipment. Momotaro is eventually joined by his three animal companions, which were also part of his legend, though they don't act as separate party members in battle. 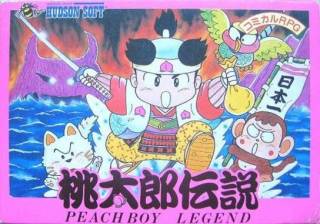