Scramble is a side-scrolling shooter originally developed by Konami for the arcade. The game predates Gradius, and shares many qualities with that classic franchise.

Scramble is a horizontal shooter played using a four-way joystick and two buttons that control the forward guns and bombs. The game has six stages, and in each stage the player must navigate a gauntlet of enemies. The environment is also a considerable hazard as the terrain can be difficult to navigate with the slow ship. Additionally, the ship is constantly running out of fuel, and must refuel on the fly by destroying fuel tanks that litter the stages. The final stage requires the player to finish a tricky bombing run, which if they fail, they must repeat the stage. After finishing the last level, the game loops back to the first stage and plays again at a higher difficulty level where the ship runs out of fuel more quickly.

Scramble was ported to many different home game systems and computers, both legally and as illegal clones. It was the subject of an important intellectual property case (Stern Electronics, Inc. v. Kaufman, 669 F.2d 852) where it was ruled that Stern Electronics Inc. (the game's publisher in North America) could copyright the images and sounds in a game and not just the game's source code.

Sequels and Relation To Gradius

The arcade game Super Cobra could be called a sequel to Scramble, as it shares basically the same game mechanic as the original. Scramble is also cited as a predecessor to Gradius in both the introduction to Gradius Galaxies on the Game Boy Advance and the Gradius Breakdown bonus DVD included with Gradius V; however, Konami disputed the relation in their guide for the Gradius Portable collection on PSP. Although Scramble may now not be part of the official Gradius continuum, it's easy to see how some of the features of Scramble, such as independently-fired weapons and hazardous terrain, were further developed for Gradius. 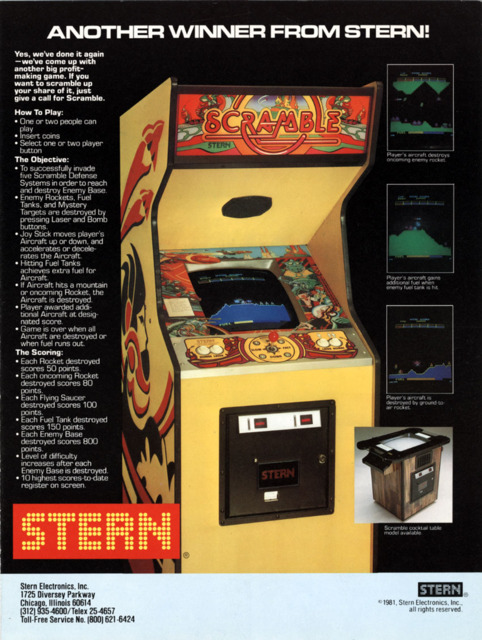