Lost between the Summer of Adventure promotion Squaresoft ran in the summer of 2000, which included Legend of Mana and the behemoth Chrono Cross, this game became a cult classic.

Threads of Fate (abbreviated ToF) is an Action-RPG released by Squaresoft (now Square-Enix) for the PlayStation on July 18th, 2000. The story revolves around two characters, Rue and Mint, which each have their own story but both quest for the same goal: the Dewprism, an ancient relic that can grant any wish, although each want the relic for different purposes.

Threads of Fate distinguished itself at the time of it's release for it's separated plot that weaves and merge throughout the game as you follow the adventure of two very different characters, Mint and Rue through their quest for the same thing: The Relic. Created by a group of ancient and powerful magicians, the Relic is thought to be the most powerful artifact that ever graced the lands.

For Rue, he wishes to revive his companion Claire. One night, a visitor (called the Arm of Death) came for Rue and killed Claire because was trying to protect Rue by attacking the Arm of Death.

Mint's story is highly comical. Opening on a giant feast for the princess of East Haven Kingdom, she gleefully runs from table to table delighting in the food. When she discovers that pumpkins, her most hated food have been served, she throws a tantrum. Her sister Maya bursts into the room, and scolds her for her bratty, spoiled behavior. Maya informs her that she will be ousted from East haven Kingdom, and will no longer be princess.

Later, Mint hears of the Dewprism, and embarks of a quest to achieve omnipotence. Her goal is simple, to become princess again and "make Maya scrub the toilet." Hopefully, no pumpkins will get in her way! "It's World Domination time!" she declares.

The story, though fairly simplistic, is impregnated with strong concepts such as destiny and fate, and the will to fight against it (Most of these elements are better shown on Rue's side of the story though). Rue's story has indeed a stronger narrative than Mint's, making him the character players will want to begin with.

An action-RPG at it's core, Threads of Fate bears resemblance to titles like the Mana games and takes cues from platformers and action adventure titles such as Alundra and The Legend of Zelda. Simplistic in it's execution, imbued with a lot of mechanics from the Secret of Mana game (an example would be the return of the ring menu), the combat system proved to be the only lacking point of the game, it's strongest being the narrative.

As with the story, the characters are played quite differently:

Both Rue and Mint are able to take part in combat, with Rue being more action based and Mint being more magic based. Rue, with the special stone on his forehead, can transform into defeated enemies and use their powers to fight other enemies. There are a total of 24 enemies he can transform into, however, he can only transform into four at a time. When Rue defeats a fifth enemy, the oldest enemy disappears from his list of available transformations. When he is in his main human form, he can use his blade, the Arc Edge, to chain attacks and defeat enemies. Mint is skilled in magic and can use seven different types of magic with different elements and seven different effects of magic, ranging from a wide area effect to an extremely strong burst. Some effects can’t be used with certain magic, and with that being said, there are a total of 35 different combinations that can be used to attack enemies. Mint can also use her rings to chain attacks and she can use her kicks to defeat enemies as well.

You will need to finish both sides of the game to know the entire story, though sadly only one dungeon per character is unique, the rest of the game being alterations of the same places.

While ToF is an action RPG, there is no set-in-stone level up system. The only thing you can raise is your HP (Health Points), MP (Magic Points) Strength and Defense. For HP and MP, the way you can raise them is by using them. If you take damage, over time you will raise your max HP. When you use magic abilities, over time your MP will raise. You can also purchase potions from Hobbs that will raise your HP and MP by 10 points each. To raise your strength and defense, you can buy items from Tonio. Another way to raise your stats is by collecting the “Legendary Items.” You can find the Legendary Sword, Shield, and Helmet, which turn out to be a kitchen knife, a frying pan, and a pot, respectively. You can give these items to the bartender and he will make certain dishes for you, provided you provide him with a certain amount of monsters for him to cook.

Threads of Fate was more of a cult following than a big hit, mainly due to the fact that it was released extremely close to both Chrono Cross and Legend of Mana as a part of Squaresoft's "Summer of Adventure." The game was ended in such a way that a sequel is possible. Given the number of franchises Square has resurrected, many fans hope Mint and Rue's story continues. 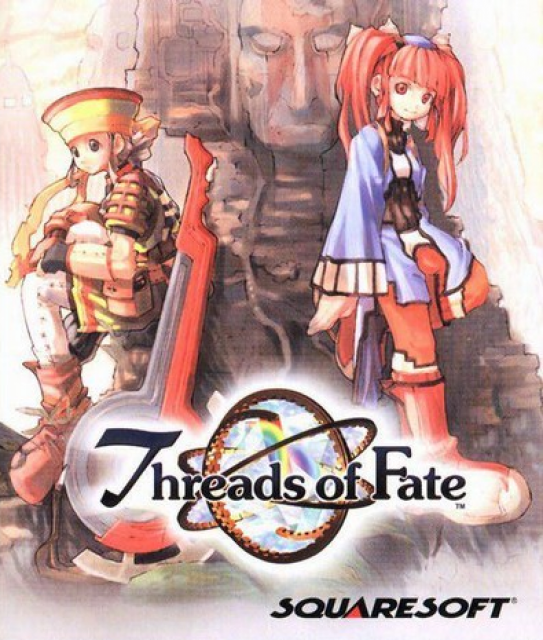