Laser Arena is a non-violent first person shooter similar to Quake 3 Arena or Unreal Tournament but in a much brighter setting where players are "tagged" instead of killed. Each player has 3 "health canisters" which represent the number of times a player can be tagged. If a player is tagged their laser suit deactivates and they are unable to move for a short period of time. After 3 tags a player is out of the arena until they are allowed to respawn.

Multiplayer supports up to 8 players and single player allows for bots.

Free-for-all - Standard deathmatch in which players face off individually and try to score the most points.

Team Match - Players face off in teams and try to tag each other for the most points.

Duel - One on One deathmatch. Most points wins.

Domination - Team based objective similar to king of the hill. Teams run to different domination points and try to defend them from the opposing team. Domination points change colour based on which team controls them. 100 points per second of domination

Mega Target - Team based objective. Players race to reach and shoot targets before the other team. Once three targets have been shot that team receives the mega target ability for 45 seconds. The team with the mega target ability must reach the core and shoot the mega target to score mega points. Difficulty is added in this mode with sentry turrets. Some of these turrets can be deactivated temporarily while other can be converted to shoot the opposing team for you. The converted turrets will stay fighting on your side until the opposing team converts or deactivates it.

There is only the laser tag gun in Laser Arena but players can collect powerups that increase firing rate or increase hit damage (which will reduce the enemy's energy canisters by two instead of just one) for a limited time.

There was also a "laser grenade" which when thrown, would shoot lasers in all directions hitting any player unlucky enough to be within its range.

There are 15 arenas in all, each having a distinct UT / Q3A feeling to them.

Other players can be connected to in a variety of ways including IP addresses, LAN parties or using a modified version of Gamespy that allows the player to find the gametype they want.

To date there is only one widely known mod for Laser Arena called "Laser Arena Enhanced". This mod improved sounds and graphics and included some new keybindings that made the game a much more enjoyable experience. More information about Laser Arena Enhanced as well as a download link can be found here. 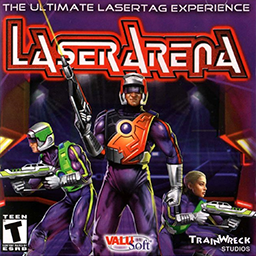