Gore is a fast-paced 3D first-person shooter for Microsoft Windows that managed to make it onto the shelves after more than 5 years of development. Although the game features a single player campaign, the main focus of Gore is its multiplayer component.

Developed on the AMP Game Engine, Gore bears many similarities to contemporary first-person shooters like Serious Sam, Quake and Unreal Tournament but was also one of the few games of its time to implement full body awareness and both first-person and third-person camera angles. However, Gore was not received very well by critics, and garnered middling scores; in a review for Gamespot, Erik Wolpaw called its campaign "largely forgettable".

On July 4, 2008, a Special Edition of Gore was released as a free download, including minor changes and an automatic patch updater.

Gore's single-player mode is largely linear and plot-free, acting as more of a 5 to 6 hour long tutorial that helps familiarize the player with the game before they jump into the multiplayer. The story is based around a battle between two conflicting sides, the UMC and MOB, and the player takes the role of a UMC rookie undertaking a training mission. The story moves the player through variants of the game's multiplayer maps that include classic environments such as a space station, warehouse and dungeon. The campaign is comprised of three episodes, taking place in post-apocalyptic Earth, medieval Earth and an alien homeworld. Although each environment has unique levels and differing content such as weapons, the enemies AI is limited as their behavior is entirely scripted. As a result, the player is usually faced with a small mob of enemies who will either run at the player or stay still and shoot.

Gore features an up to 16 player class based multiplayer system with 19 maps and 6 game types which include:

Although Gore is strikingly similar to other fast-paced first-person shooters, it also has some significant gameplay differences. One being a stamina system that has been introduced which controls the player's speed and ability to jump. Stamina is lost obviously by running, jumping and taking damage, but is also dependent on the class being played and the weapon being carried. When low on stamina, the character shows signs of fatigue such as heavy breathing and slow speed before passing out for a short time and leaving the player vulnerable when stamina reaches zero. Stamina is recovered by resting, getting certain pickups, and getting healed, adding a whole new element to the game as it not only effects the class and weapons chosen by the player, but also how the player moves around the level.

Another difference that Gore implements is the armor system. Instead of protecting the whole body like in most games, the part that is protected is location specific, forcing the player to think about where to shoot to maximize damage. Body armor parts include head, chest, and leg armor, as well as a gas mask. Each piece of armor is visible on the body and can be destroyed, with different weapons being more effective as usual. Furthermore, most item pickups are destroyable in Gore and can be shot and used to prevent enemies from getting the pickup. When destroyed, an explosion is created that is directly proportionate to the how good the pick up is. This mechanic both makes camping for pick ups harder and provides a new way to damage enemies. The pickups include:

Gore also has classes for the player to choose from. There are five in total including support, scout (sniper), medium infantry, heavy infantry and mechanized infantry, with speed being sacrificed for damage resistance going from light to heavy. Each class has different characteristics and exist on both the UMC and MOB teams. The result is that depending on the team the player chooses, the same class can have different starting weapons and models.

Despite the above differences, Gore is so fast-paced that it almost makes these new mechanics redundant as there isn't time to worry about stamina and armor. Apart from the class based characters to play as, the rest of Gore's gameplay is standard, the player navigates the levels by running with the occasional teleporter, jump pad or lift while shooting anything that moves. 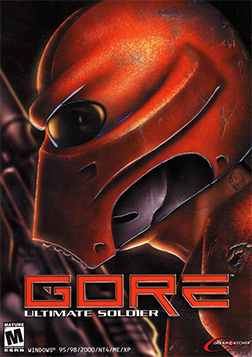