Kid Icarus is a 2D platformer released on the Nintendo Entertainment System, famed for its blending together of elements from The Legend of Zelda, Super Mario Bros. and Metroid.
Game Boy Advance

Kid Icarus is a platforming video game that was developed by Nintendo R&D1 and published by Nintendo for the Nintendo Entertainment System in 1987. It is the first game in the Kid Icarus series, and it has since been re-released on multiple occasions; on August 10, 2004, as part of the Famicom Mini Series (Classic NES Series in the US), and on February 12, 2007, on the Wii's North American Virtual Console. For European and Australian Virtual Consoles, it was released on February 23, 2007.

Kid Icarus was developed on code previously written for Metroid. As such, the game allows for both horizontal and vertical-scrolling movement, and progress is recorded via a password system. The game also features a direct reference to Metroid through the inclusion of an enemy type called the komayto; small, flying jellyfish-like creatures that resemble metroids. The name "Komayto," or "Kometto," can also be inferred to mean "child metroid," as "Ko" in Japanese can refer to the kanji character for "child" and is is commonly used when referring to youth. (ex: "Kodomo" is the Japanese word for a human child, and "koinu" is the word for "puppy.")

However, Medusa would not go without a fight. She assembled the monsters and evil spirits that lurked in the Underworld to conquer the Palace in the Sky, where Palutena dwelled. This caused a war to erupt, and it didn't take long for Medusa's minions to overwhelm Palutena and her army, which led to her imprisonment. Afterwards, Medusa seized the Three Sacred Treasures - the Mirror Shield, the Arrow of Light, and the Wings of Pegasus - and gave them to her most trusted and powerful minions.

Having been defeated and imprisoned, Palutena only had one hope left: to seek the aid of Pit, a young angel who had been trapped in the Underworld. Using the last bit of her power, she bestowed upon Pit a magical bow, named "The Sacred Bow of Palutena", leaving him with the task of escaping the Underworld, retrieving the Three Sacred Treasures that would aid him in defeating Medusa, and rescuing her, restoring peace to Angel Land

The gameplay of Kid Icarus consists of advancing through different levels while either avoiding or defeating the enemies that get in his way. Defeated enemies will drop hearts, the game's form of currency, which can be used to purchase items at shops scattered throughout the game. Throughout most of the game, exploration is done through vertical or side-scrolling platforming gameplay; the game's vertical sections also feature a wraparound world, in which advancing beyond the boundary of the left or right side of the screen will cause Pit to reenter the screen from the opposite side. Towards the end of the game, after escaping the Underworld, Pit equips the Three Sacred Treasures and gains the ability to fly. During these final portions of the game, Pit can freely fly around the screen while attacking his enemies.

The game was first released in Japan for the Famicom Disk System which allowed players to save their game on the disc. The original version also supported the Famicom's second controller microphone. As an Easter egg, players could ask the shopkeeper to lower his prices by speaking into the microphone. Depending on the shopkeeper's mood, he would either lower prices on items or rebuff the player's offer by raising them.

A 3D Classics remake of Kid Icarus was released on January 5th, 2012 on the 3DS eShop. This version of the game was developed by Arika, features graphic improvements and the option for layered 3D display. This version also does away with the original game's password system in favor of save slots. In Europe, the game was free to those that registered two games out of a few selected titles before January 31st, 2012. In North America, the retailers Gamestop, Amazon, and Best Buy offered download codes for the game as a bonus to people that preordered Kid Icarus: Uprising. 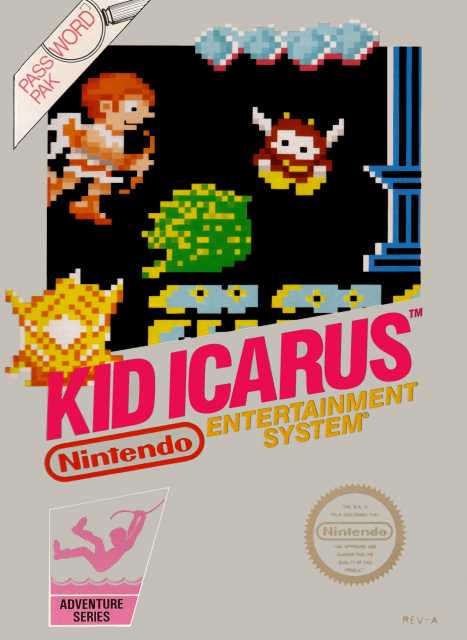