A side-scrolling shooter for the TurboGrafx-16, Dead Moon takes players across six levels, fending off an alien invasion.

Originally released in 1991 by ZAP Corporation and Natsume for the TurboGrafx-16, Dead Moon (JP: Dead Moon: Tsuki Sekai no Akumu, or "Dead Moon: Nightmare of the Moon World") is a side-scrolling shoot 'em up taking place in the near future. In the game, a comet sets its sights on Earth. Originating near Pluto, the United Nations sent missiles out to destroy the comet. Rather than destroying it, the missiles merely altered its orbit, sending it hurtling into the moon (hence the title of Dead Moon). Upon investigation, it is discovered that the comet was actually an alien spacecraft, setting the stage for the game.

Dead Moon was later released for the Virtual Console on June 4, 2007.

As a traditional side-scrolling shoot 'em up, there isn't much that differentiates Dead Moon from other shooters of the time (which was why it wasn't well-received). The main difference between Dead Moon and other shoot 'em ups are the power-ups, which are structured slightly differently. Upgrade ships will appear from either the bottom or the top of the screen. There are four types of upgrades, organized by color. Red is a circular spread shot, blue is a straight laser beam, green is a vertical wave beam, and yellow is the standard beam. If the player picks up one color, and then picks up another of the same, then it will upgrade it. However, if the player picks up one color, and then a different color, the second color will overwrite the other one.

Other than that, Dead Moon is fairly standard. Bombs act similarly to other games, whereas the player starts with three bombs. Each colored upgrade past the upgrade limit will add a single bomb to the count. Lives are never awarded (the player starts with two). Rather, when the ship gets hit, the power level of the current weapon is lowered by one.

Upon completion of the game's six levels, the scenes restart. The player is presented with a harder version of the game, where enemies can take more damage. 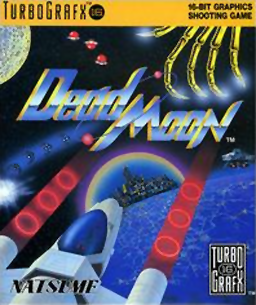