Star Wars: Battlefront (not to be confused with the 2015 reboot of the same name) is a sci-fi fantasy team-based shooter developed by Pandemic and published by LucasArts for the Xbox, PlayStation 2, and PC on September 21, 2004. It was later ported by Aspyr to the Mac on July 2005.

Based on the Star Wars sci-fi film series, Battlefront focuses on large-scale multiplayer-oriented two-team battles similar to the Battlefield series. It features numerous locales, characters, and weaponry from the series, and focuses on two separate conflicts: the Clone Wars (between the Galactic Republic and the Confederacy of Independent Systems) and the Galactic Civil War (between the Rebel Alliance and the Galactic Empire).

Like the Battlefield series, the game uses a character class system (with each faction having their own unique class) and numerous vehicles scattered throughout the battlefield (including agile speeder bikes and hulking AT walkers). The game can be played in first-person or third-person perspectives.

Along with the game's standard multiplayer (where up to 64 players can fight in the same battle, reduced to 32 for the Xbox version and 16 for the PS2 version), the game includes two single-player campaigns (each focusing on key battles from the series in a linear perspective) and a bonus Galactic Conquest mode (a one-on-one mode where players attempt to conquer the galaxy in a turn-based strategy fashion).

The game later received a sequel a year later, titled Star Wars: Battlefront II, and received several handheld-focused spin-offs. The series was later rebooted by DICE (the studio behind the Battlefield series) in 2015 as Star Wars Battlefront.

Battlefront includes only one game mode based on "Conquest" from the Battlefield series. Each team has a finite amount of Reinforcements, and must deplete the other team's Reinforcements to win (through both killing enemies and controlling the majority of Command Posts, or CPs, scattered throughout the battlefield).

Each battlefield has a certain amount of capturable CPs, which serve both as a spawn point for the controlling team and as a way to score points (as controlling double the amount of CPs as their enemy slowly deplete enemy Reinforcements). CPs can only be captured by standing near them for a short amount of time. Enemy CPs take longer to capture (as it must be brought back to its Neutral state beforehand). Enemy players can contest the capture of Neutral CPs by standing near them.

Once a certain amount of Reinforcements are depleted, enemies cannot respawn and must fend for themselves. If all CPs are captured at once, the game triggers a countdown timer of 20 seconds. If the enemy team does not capture a CP before the timer runs out, the controlling team wins the match automatically (regardless of Reinforcements).

Depending on the mission or server, games may include non-playable Hero characters to aid a team in combat. Although Heroes are faction-based (Mace Windu for the Republic, Count Dooku for the CIS, Luke Skywalker for the Rebels, and Darth Vader for the Empire), they play the same way. They are invincible (but can be knocked away from some attacks) and attack at close range with their lightsabers.

A turn-based strategy mode where two players (one Human and one A.I.) attempt to dominate the galaxy using a particular faction by taking complete control of all six contested planets and then destroying the enemy base in their home planet (Kamino for the Republic, Geonosis for the CIS, Hoth for the Rebels, and Endor for the Empire).

During each turn, the Attacking player (either the winner of the previous battle or, in the first turn, the Human player) selects which contested/enemy planet to attack. Then, both players choose a Planetary Bonus from a planet they completely control. The match then plays as normal, with each Planetary Bonus giving the team a special bonus (such as sabotaged enemy vehicles or the use of a Jedi Hero). The winner of the match claims that battlefront of the planet and then becomes the Attacking player. Each of the six planets have two battlefronts to conquer before a team can completely control it.

Each of the four factions share the same class archetypes, each with their own range of weaponry and utility. Each faction has their own unique properties of each class (such as different weaponry for each faction's Pilot). All general classes carry a semi-automatic infinite-ammo rechargeable Blaster Pistol for self-defense, while most also carry explosive Thermal Detonators (3 by default).

Each faction also has a Special class to choose from, each with their own unique abilities and weaponry.

The base game includes 16 maps, spanned across 10 different planets. An additional map was added in some versions post-release, bringing the total to 17. 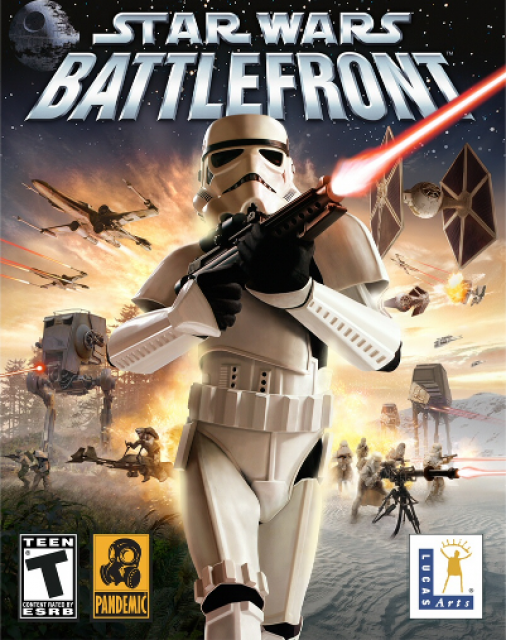