Focusing on a humble plumber and his brother setting out to rescue a Princess who has been kidnapped by a vile lizard king, Super Mario Bros. is a platformer created by Shigeru Miyamoto, published by Nintendo, and is one of the best-selling video games of all time.
Game Boy Advance

Super Mario Bros. is a fantasy platformer created by Shigeru Miyamoto, and published by Nintendo. The game was released in 1985 for the Nintendo Entertainment System. Super Mario Bros. has gone on to be considered by many to be one of the best platformers ever created. The Guinness World Records Gamer’s Edition, a record keeping organization, declared Super Mario Bros. for the NES as the best selling video game of all time with more than 40 million copies sold worldwide.

Super Mario Bros. has two direct sequels, numerous spin-offs, and has also crossed mediums--most notably into television and movies. Super Mario Bros., the movie, was the first movie to be based on a video game. Mario, the main character of the game, is one of Nintendo’s most recognizable mascots, and has become so famous that he is recognized worldwide.

The game has been released in a variety of forms. It has been released on the Game Boy Advance, Super Nintendo Entertainment System, Nintendo Entertainment System, Wii Virtual Console, and has been featured in Animal Crossing as a game that can be obtained through use of an Action Replay. The game was later repackaged in Super Mario All-Stars, along with several other early Super Mario games.

The music for the game is composed by Koji Kondo, also well known for his compositions in games such as The Legend of Zelda. The game's iconic "Ground Theme" has been used in dozens of games since, and it is now considered the "theme song" of the Mario series. The game's other songs, such as the Starman theme, underwater, underground, the game over jingle, and the castle themes have also been featured in dozens of future games, not limited to the Mario series.

The gameplay of Super Mario Bros. is simple. The game has eight worlds, and each world has four sub-levels. Basically, Mario must travel through all eight worlds, avoiding obstacles and enemies along the way. At the end of each world is a castle, in which Mario must fight one of Bowser’s evil minions; with the exception of the last castle in which Mario fights Bowser himself.

The weapons in Mario's arsenal are not vast by any means. Mario can jump on enemy’s heads, shoot fireballs (by picking up a Fire Flower) at them, or use “Star Power” by picking up a Starman, which makes him an invincible machine of destruction, laying waste to everything in his path. Mario can also use the occasional Koopa shell to kill enemies. This four pronged offensive is how Mario will dispatch of most enemies, with the exception of Bowser and his castle minions. When it comes to the bosses of the game there is another way of dealing with them that is presented. Jumping on their heads will only get Mario killed, and there are no Starmen to be had during these instances. They can be killed with fireballs, if Mario somehow makes it to the end of the level with with that ability; but if Mario doesn't, there aren't many other approaches to dispatching these enemies.

Mario begins the game with 3 lives, and can earn more by obtaining 1-up mushrooms, collecting 100 coins, or by jumping on multiple enemies (or a single enemy multiple times) without touching the ground. It is possible to earn many lives very quickly by using exploits such as repeatedly jumping on a Koopa shell, kicking it into a block, and jumping on it again as it returns. If Mario loses all his lives, the player is returned to the start screen.

All of the the bosses in the game are standing on bridges over pits of lava, blocking the way to the end of the level. At the end of each bridge is an ax. Using a platform above the boss or running underneath the boss when he jumps, and then touching the ax at the end of the bridge will cause the bridge to collapse, sending the boss into the lava below.

After each one of the “boss” battles a mushroom retainer (aka Toads) is saved who says this famous line, “Thank you Mario! But our princess is in another castle!” The exception is, of course, when Mario finally beats Bowser in World 8-4 and rescues Princess Peach.

In November 1986, the Milwaukee Journal described the original NES version of Super Mario Bros as "the best video game this year".

In the March 1986 issue of Computer and Video Games, Clare Edgeley gave the arcade version, Vs. Super Mario Bros, a positive review.

Super Mario Bros. (and the Nintendo Entertainment System) were released at a major turning point in video game history, shortly after the infamous video game market crash in 1983 (caused by oversaturation of the market with budget, low-quality games). Marketed as more of a toy than a "video game console," the NES was able to find its success due, in part, to Super Mario Bros., which was offered along with a purchase of a new console, rendering it one of the best selling games of all time.

Since its release, Super Mario Bros. has been regarded as one of the most influential games of all time. It is consistently placed on official "top games of all time" lists, including lists from publications such as Nintendo Power, Electronic Gaming Monthly, IGN, Screw Attack, Game Informer, and many, many more.

There is minor controversy regarding the actual date of Super Mario Bros.'s release. While the game's official release date in Japan is recorded and well known, its release date in North America is highly disputed, and even the year is uncertain. Several sources cite the release date as 1986, including video game historian Steven Kent. 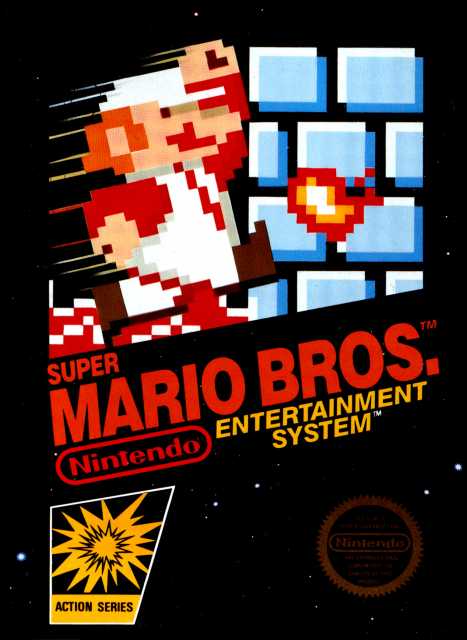